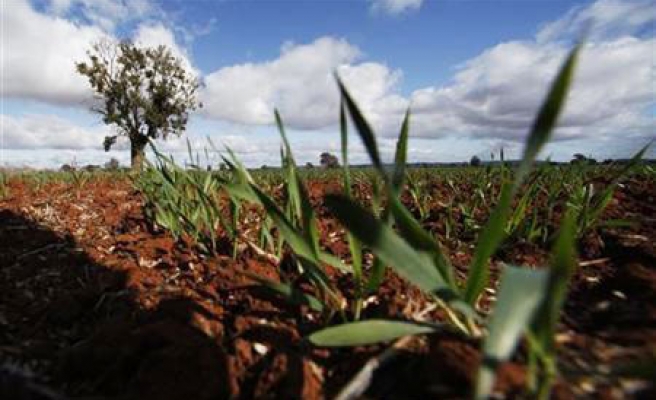 Creating crops with deeper roots could soak up much more carbon dioxide from the air, help mankind fight global warming and lead to more drought-tolerant varieties, a British scientist says in a study.

Plants use carbon dioxide (CO2) and sunlight to grow and carbon is stored in the roots and leaves. Deeper and more bushy roots would store more carbon underground.

Many crop varieties have root systems that don't extend beyond one metre, limiting their access to water during drought but ensuring rapid growth above ground and bumper yields when the weather is good.

"Doubling root biomass to a nominal two metres is really the key issue, together with the longevity of the carbon they secrete and sequester below-ground," Kell says in the study.

He said previous studies have doubted the benefits of deep roots locking away large amounts of carbon. But this was because the studies did not take soil measurements much below a metre.

"What matters is not so much what is happening now as what might be achieved with suitable breeding of plants with deep and reasonably long-lived roots. Many such plants exist, but have not been bred for agriculture," he says.

Kell calculated that even a 2 percent increase in soil carbon down to 2 metres could lead to an extra 100 tonnes of carbon per hectare if that carbon stays in the soil for at least two years.

To underscore the potential, Kell and colleagues created a carbon calculator that allows users to see how much carbon could be locked away depending on depth and percentage of carbon uptake over the total area of global crop and grasslands.

The calculator can be found here: http://aob.oxfordjournals.org/content/early/2011/08/03/aob.mcr175.full.pdf+html

Kell based the calculator on the existing estimates of the world's soils holding 1.5 trillion tonnes of carbon -- double the 750 billion tonnes in the atmosphere -- and the 4.6 billion hectares of crop and grasslands.

The more carbon locked away, the more the world's croplands could reduce or even halt the annual rise in global CO2 levels in the atmosphere, the study shows.

Carbon dioxide levels in the air have risen 40 percent to 390 parts per million (ppm) since the start of the Industrial Revolution and are growing about 2 ppm a year.

"If you add an extra 2 ppm a year and you can effectively trap that by increasing the amount of roots by an equivalent amount, you can stop the increase stone dead," he told Reuters in an interview.

"To take about 100 ppm from the atmosphere is highly feasible and that equates to an extra 100 tonnes per hectare on average for two years," he said.