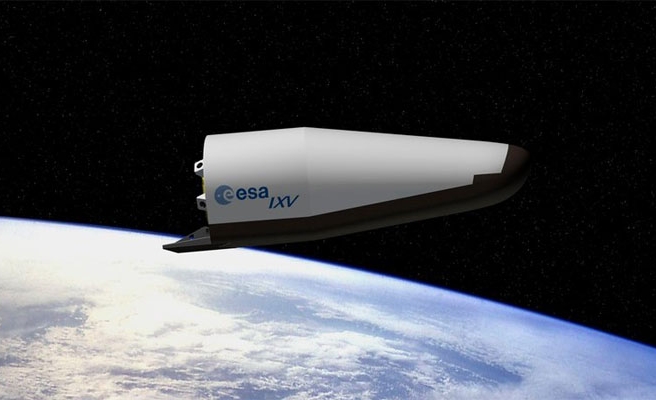 An experimental spaceplane successfully returned to Earth on Wednesday after a 100-minute test flight that the European Space Agency (ESA) hopes will pave the way for the continent's first reusable space transportation systems.

Reusable spaceplanes that can carry out controlled landings on runways rather than splashing down in the ocean could help bring down costs. They could also enable scientists to bring back samples from celestial bodies such as comets.

ESA's Intermediate eXperimental Vehicle (IXV), which is the size of a car, lifted off from ESA's spaceport in French Guiana aboard a rocket at 1340 GMT, following a 40-minute delay caused by problems with data transmission systems.

A variety of materials ESA sought to test, ranging from high-tech carbon fibre to ordinary cork, shielded the craft from temperatures that can typically reach more than 1,600 degrees Celsius (2,900 Fahrenheit) during re-entry.

IXV used parachutes to slow down and flaps and thrusters autonomously steered it to splash down in the Pacific Ocean about 100 minutes after the launch.

There, flotation balloons kept it from sinking while two Zodiac inflatable boats raced to the landing site to secure the spaceplane until it was recovered by ship.

"It couldn't have been better ... This will advance the frontiers of knowledge," ESA Director General Jean-Jacques Dordain said at the launch site in French Guiana, in comments that were broadcast on the Internet.

ESA has said it will present data collected by the 300 pressure and temperature sensors attached to IXV around six weeks after the test flight.

IXV, which ESA says cost around 150 million euros ($169.70 million) in design, development and related ground support, is similar to NASA's space shuttle orbiters, which were retired in 2011 after 30 years of missions, and to the Dream Chaser spaceship being developed by Sierra Nevada Corp.

Unlike those vehicles, however, the ESA experimental spaceship is wingless.

The next step for ESA will be development of a re-entry vehicle dubbed "Pride", which it says will be similar to the U.S. military's X-37B robotic space plane, though smaller and cheaper and it will be able to land on a runway.