'Faster than light' particles may be physics revolution

Over three years, and from 15,000 neutrino "events", a huge detector at the Italian centre deep under mountain rock recorded what OPERA spokesman Antonio Ereditato described as the "startling" findings. 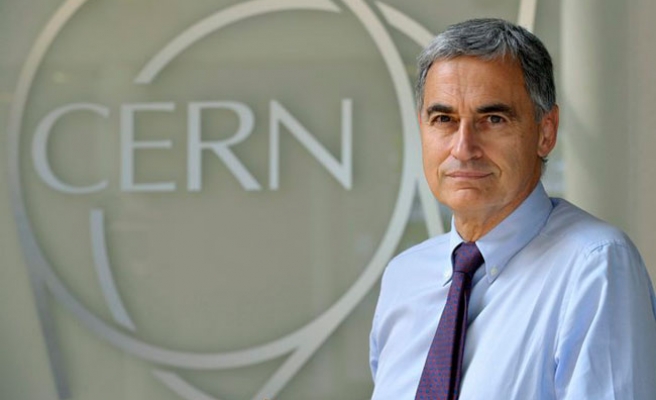 Scientists around the world said on Friday the discovery of sub-atomic particles apparently traveling faster than light could force a major rethink of theories on the makeup of the cosmos, but the findings would first have to be independently confirmed.

The CERN research institute near Geneva said measurements over three years had shown neutrinos pumped to a receiver in Gran Sasso, Italy, had arrived 60 nanoseconds sooner than light would have done -- a tiny difference that could nonetheless undermine Albert Einstein's 1905 special theory of relativity.

"It is premature to comment on this," Professor Stephen Hawking, the world's most well-known physicist, told Reuters. "Further experiments and clarifications are needed."

Professor Jenny Thomas, who works on neutrinos at CERN's friendly rival Fermilab near Chicago in the United States, commented: "The impact of this measurement, were it to be correct, would be huge."

Professor Geoffrey Hall of London's Imperial College, who has worked with CERN, said the implications of the results were profound, possibly challenging "a fundamental part of our science culture."

CERN's own research director Sergio Bertolucci said if the findings were confirmed -- and at least two separate laboratories are likely to start work on this in the near future -- "it might change our view of physics".

The high level of caution is normal in science where anything that could be a breakthrough discovery, especially overturning well-established thinking, is in principle always checked and rechecked by other researchers.

The discovery would force a rethink of fundamental theories of physics and of the nature of the universe. It would herald a revolution in physics comparable to that caused by Einstein's publication of his Special Theory of Relativity.

In a comment issued by CERN, the world's leading laboratory for particle research on the edge of Geneva, Bertolucci underscored this principle.

"When an experiment finds an apparently unbelievable result and can find no artefact of the measurement to account for it, it is normal to invite broader scrutiny....it is good scientific practice," he said.

The experiment, whose measurements were posted on the scientific website http://arxiv.org/abs/1109.4897 overnight, found the long enigmatic neutrinos consistently travelling at an average of 60 nanoseconds faster than light.

The team, working in an experiment dubbed OPERA, pumped neutrinos -- often called ghost particles because they pass through matter, and human bodies, unnoticed -- from CERN 730 kms (500 miles) to Gran Sasso south of Rome.

Over three years, and from 15,000 neutrino "events", a huge detector at the Italian centre deep under mountain rock recorded what OPERA spokesman Antonio Ereditato described as the "startling" findings.

He said his team had high confidence they had measured correctly and excluded any possibility of some outside influence, or artefact, affecting the outcome. "My dream is now that other colleagues find we are right," he added.

In Einstein's Special Theory of Relativity, which underpins the current view of how the universe works, nothing can travel faster than light -- 300,000 kms, or 186,000 miles, per second -- because its mass would become impossibly infinite.

Einstein's theory has been tested thousands of times over the past 106 years and only recently have there been just slight hints that the behaviour of some elementary particles of matter might not fit into it.

These hints were detected last year in Fermilab's MINOS experiment with neutrinos, but -- unlike those of OPERA -- were found to be within a normal margin of error.

Fermilab's Thomas, who is likely to be involved in MINOS experiments to check the CERN-Gran Sasso measurements, said if they were correct "it would overturn everything we thought we understood about relativity and the speed of light."

Ereditato, a physicist who also works at the Einstein Institute in the University of Berne, said the potential impact on science "is too large to draw any immediate conclusions or attempt physics interpretations."

Also declining to claim a genuine scientific discovery before other researchers had confirmed them, he said the neutrino, whose existence was first confirmed in 1934, "is still surprising us with its mysteries."

Scientific bloggers on the Internet said the particle might be slipping into and out of dimensions, other than the known four of length, breadth, depth and time, as predicted by the controversial "string theory" of how the cosmos works.

The OPERA team is due to formally present its findings to the scientific community later on Friday at CERN, home to the Large Hadron Collider, or LHC, which is smashing particles together in research on how the universe began.