On an average summer, about half of Greenland's surface ice melts, according to NASA. 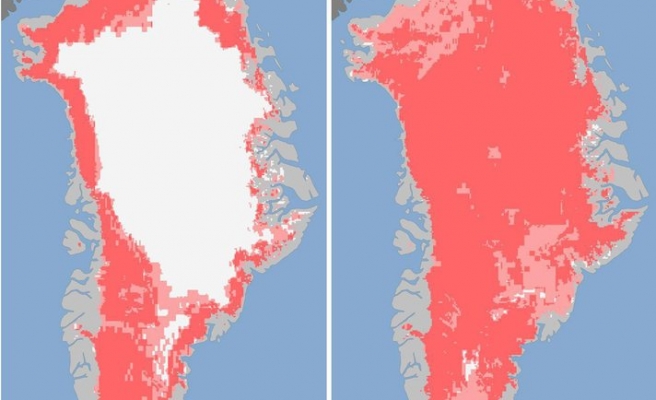 For a few days this month, NASA's images of the Greenland ice sheet turned red, indicating that for a while, almost the entire surface of the vast frozen island was melting.

The big melt in Greenland is part of an overall picture of an unusually warm season across the Arctic, with much of the sea route from Western Europe to the Pacific as free of ice in July as it normally would be by summer's end, the chief of the U.S. National Snow and Ice Data Center said on Wednesday.

On an average summer, about half of Greenland's surface ice melts, according to NASA. This summer, satellites showed about 97 percent of the ice sheet thawed at some point in mid-July.

The change was swift, as seen in images posted at http://science.nasa.gov/science-news/science-at-nasa/2012/24jul_greenland/ .

On July 8, there was a big white area in the middle of the image, indicating that 40 percent of Greenland's surface had thawed; by July 12, virtually the whole island was pictured as red, showing widespread defrosting.

For Mark Serreze, director and senior research scientist at the Colorado-based National Snow and Ice Data Center, one interesting aspect of the Greenland event is its relative rarity.

This kind of comprehensive surface melting might happen about every 150 years or so in Greenland, which would make this year unusual but not unprecedented, Serreze said by telephone.

However, he said, most of the previous events were clustered around a period 7,000 years ago known as the Holocene Thermal Maximum, when variations in the sun's tilt on its axis sent more sunshine to extreme northern latitudes, warming them up.

There is no such solar tilt going on now, but the melt is occurring just the same. The NASA report, released Tuesday, followed a report last week that showed Greenland's Petermann Glacier breaking off an iceberg almost twice the size of Manhattan, or 70 square miles (181 square km).

HOLES IN THE ICE

"What we're seeing over Greenland now is really just part of this much bigger picture of a very warm melting summer in the Arctic," Serreze said.

He said the sea ice across much of the Arctic is in a "sorry state" - thinning, with Swiss-cheese-like holes that can be seen in high-resolution satellite images.

When Greenland's land-based ice sheet melts, it can have an effect on sea levels. When the sea ice across the Arctic melts, it has little impact on sea levels but a powerful impact on weather in the Northern Hemisphere, leading some climatologists to call the Arctic Earth's air conditioner.

Satellites started monitoring the Arctic in 1979; ship and aerial observation before that provides an accurate record for the last 60 years or so. To check on ice cover before that, scientists examine ice cores and other evidence.

The so-called Northwest Passage, a water route from the Atlantic to the Pacific that winds through the Arctic, first opened up in 2007. Serreze would not speculate about whether this route will be open this year, saying it would depend on wind and currents in the region. He said ice cover in the Chukchi Sea off the Alaskan coast is near normal.

However, the passage eastward from the North Atlantic to the Pacific shows open water as far north as it would normally be during September, typically the month when Arctic sea ice hits its low ebb.