The presidential election is being debated extensively in the world media. One of the most important topics of discussion is the effect of Google on the US election. Donald Trump has accused Google of manipulating the remaining weeks and hours are now left behind. Trump accused has Google of hiding negative search results about Clinton and showing Clinton ahead in the polls. 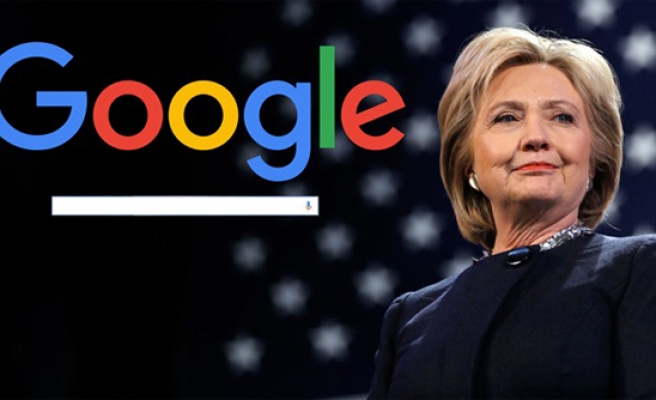 Donald Trump's claim that Google has been manipulating search results has been debated hotly in the media.  Trump has recently reignited his suspicions about Google. The Twitter user named @BesliLikert has also completed a detailed research on this issue, revealing how Google put Clinton in the foreground.
The reality is that people trust the “unbiased” internet search giant Google so much it can actually influence up to 10 million undecided voters to choose Hillary Clinton for president, prominent US psychologist and author Robert Epstein told RT following years of research. This exlusive report in RT highlights how - despite being a supporter of the Democratic presidential nominee - Dr. Epstein believes Google’s unchecked algorithm of placing one candidate over the other in search results constitutes a “threat to democracy.”

RT: Robert, how did you discover that Google is possibly in cahoots with the Clinton campaign?

RE: Well I didn’t find out that they were necessarily supporting Hillary Clinton, that’s not what I found at first. First, through several years of research, I found that they had the power to control elections, the power to shift the votes. So, that was more than four years of experimental research with more than 10,000 people in 39 countries.

Now, more recently, many people have established that Google has a very close relationship with Hillary Clinton. That didn’t come from my research, that came from all kinds of investigative research by many people.

RT: Are you going to take a look at Facebook and Twitter as well? It looks like social media play an even bigger role in the elections than televised debates.

RE: Well, we know now that Facebook has the power to shift about 600,000 votes to Hillary Clinton on Election Day with no one knowing this is occurring. All they have to do is send out “Go out and vote” reminders to Hillary Clinton’s supporters, but not to Trump’s supporters. That would cause a lot of people to vote who would otherwise stay home. So yes, we’ve looked at Facebook, we’ve looked at Twitter. But again, Facebook can shift 600,000 votes, Google can shift somewhere between 2.6 and 10.4 million votes.

RT: Have you been able to find abnormal search results by Google in some other countries intended to influence the outcome of elections?

RE: We haven’t look carefully at too many countries. We’ve looked at the UK election in 2015, we looked at the national election in India, at the Lok Sabha election in 2014. What we do know is that it is the nature of Google’s algorithm to put one candidate ahead of another. That happens automatically. That happens, as Google would say, organically. So, this means that Google’s algorithm has probably been determining the outcomes of close elections around the world for many years, probably actually controlling the winner in as many as 25 percent of the national elections of the world.

RT: What do you think about this threat of big data? Do you think Google and other search engines analyses all search results by an individual for a good purpose?

RT: You’ve said that unlike Europe, Russia and China were able to overcome the Google monopoly, but a lot of people are still using this search engine. Do you think that the US company can manipulate public opinion in Russia as well?

My newest research shows, for example, that Google seems to be favoring Hillary Clinton in its search suggestions, the suggestions it gives you when you first start to type an item, and from new research I’ve done, we know that if you suppress negative search suggestions from one candidate, that shifts votes and opinions towards that candidate. So, Google is not the only problem. Any of these big tech companies can use these techniques for surveillance, for manipulation, for control, and I think we have to be concerned about the big tech industries in general around the world, not just Google.

RT: How do you oppose such great power being wielded by one corporation like Google?

RE: Well, the problem with a lot of power being in the hands of one company is that the private company is not answerable to the public. The private company does not have people who we voted on. The private company might be run almost like a monarchy, with the CEO having enormous power and the public having no say whatsoever in what they do, even not having access to their internal records. So we would have no idea of exactly what they’re doing or how they’re doing it and how they’re making decisions. This is potentially very dangerous. The situation right now is unprecedented in human history. There has never been so much power placed in the hands of so few people who are beyond the reach of any laws, beyond the reach of any regulations, and who don’t necessarily have the public interest in mind.

I made a prediction on Twitter recently, you can check this: I not only have predicted that he will set up his own television network but that he will launch his network with a guaranteed hit show. It will be a reality TV show about Donald Trump running for president, and that will be a hit show, so I think that’s his only interest here. Hillary Clinton will become our next president, it’s guaranteed and in my opinion Donald Trump has no interest, never had any interest in becoming president.

RT: Do you believe that Hillary Clinton will become US president through the manipulation of public opinion?

RE: Oh, Hillary Clinton is guaranteed to win this election, and I have said previously based on polls that seem to show a kind of a close vote, that those polls did not take into account the power that Google and other companies have to shift votes. That’s missing from these polls. So, once you realize the power that these companies have, Hillary Clinton is absolutely guaranteed to win, and she will win in the margin of somewhere between 2.6 million and 10 million votes. If we take the mean, the average of those two numbers, I guess you could say it’s pretty clear that she will win by approximately 6.5 million votes.

RT: Given that the United States has such an expensive and powerful media industry, would you say that voters in the US have a real picture of the presidential campaign?

RE: Well, voters in the United States I think do get a pretty good picture because we have so many different kinds of media and people are just bombarded with information from newspapers, magazines and the internet, more than 400 different television channels. So I think we do get a pretty complex and deep picture of things, but you have to remember that all of these forms of media are competitive. So, we’re getting one perspective from one magazine, another perspective from another magazine.

But when you come to something like Google, there’s no competition. There’s no competitor. It’s a completely different kind of influence, it’s non-competitive. In other words, if you’re still trying to make up your mind and you go to Google and ask a question about the candidates or about some sort of issue related to the election, Google will show you whatever it wants to show you and that can easily, easily tip your opinion one way or the other and there’s no competitor, there’s no way for anyone to compensate what Google just told you.