The mission makes India the first country in Asia to reach Mars, after an attempt by regional rival China failed to leave earth's orbit in 2011. 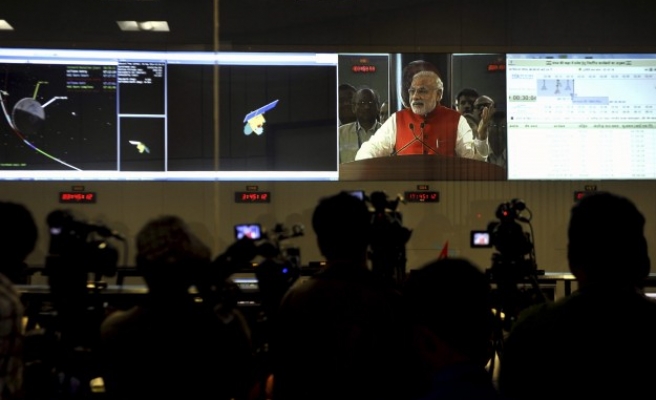 India's low-cost mission to Mars successfully entered the red planet's orbit on Wednesday, crowning what Prime Minister Narendra Modi said was a "near impossible" push to become the only country to complete the trip on its maiden attempt.

The Mars Orbiter Mission was achieved on a budget of $74 million, nearly a tenth of the amount the U.S. space agency NASA spent on sending the Maven spacecraft to Mars.

"History has been created today," said Modi, who burst into applause along with hundreds of scientists at the state-run Indian Space Research Organisation (ISRO) when it was announced the mission had been accomplished.

"We have dared to reach out into the unknown and have achieved the near impossible," said Modi, wearing a red waistcoat at the space command centre in the southern city of Bangalore.

India joins the United States, Russia and Europe in successfully sending probes to orbit or land on Mars. Apart from India, none managed to succeed on their first attempt.

The mission also makes India the first country in Asia to reach Mars, after an attempt by regional rival China failed to leave Earth's orbit in 2011.

ISRO successfully ignited the main 440 Newton liquid engine and eight small thrusters that fired for 24-minutes and trimmed the speed of the craft to allow smooth orbit. A confirmation of orbit entry was received at around 8 a.m. India time (0230 GMT).

After completing the 666 million km (414 million miles) journey in more than 10 months, the spacecraft called Mangalyaan - meaning Mars craft in Hindi - will now study the red planet's surface and scan its atmosphere for chemical methane. It will not land on Mars.

The expected life of the craft is six months, after which it will run out of fuel and the agency will not be able to maintain its orbit.

Modi has said he wants to expand the country's five-decade-old space programme. The technological triumph is fortuitously timed for him - he will be able to flaunt the achievement on a trip to the United States starting on Friday.

Modi also holds the additional charge as India's minister of space, and has endorsed the low-cost of the project, saying it cost even less than the budget of 'Gravity'. The Hollywood blockbuster cost about $100 million to make.

NASA, which helped India with communications on the mission, congratulated ISRO. The Mangalyaan and the NASA's Maven, built at a cost of $671 million, are simultaneously orbiting the red planet.

INDIA IN SPACE VS OTHERS

India's space programme was launched in the early 1960s and the country developed its own rocket technology after Western powers imposed sanctions for a nuclear weapons test in 1974.

Still, the country remains a small player in the global space industry that grew to $314 billion in revenues and government budgets in 2013, according to Colorado-based Space Foundation.

"ISRO will now hopefully attract a lot of business," said Mayank N. Vahia, a scientist at the Tata Institute of Fundamental Research. "We will now attract more international attention and international trade for satellites."

Two-thirds of the craft's parts were made by Indian companies such as Larsen & Toubro and Godrej & Boyce.

With 30 Indian and 40 foreign satellite launches so far, its nearest cheap competition would be China, which is armed with bigger space launchers. ISRO signed an agreement with China National Space Administration on Friday to cooperate in research and development of various satellites.

Despite its success, India faces criticism for spending on space research as millions go hungry.