A joint European-Russian mission aiming to search for traces of life on Mars blasted off on Monday for the start of a seven-month unmanned space journey to the Red Planet. 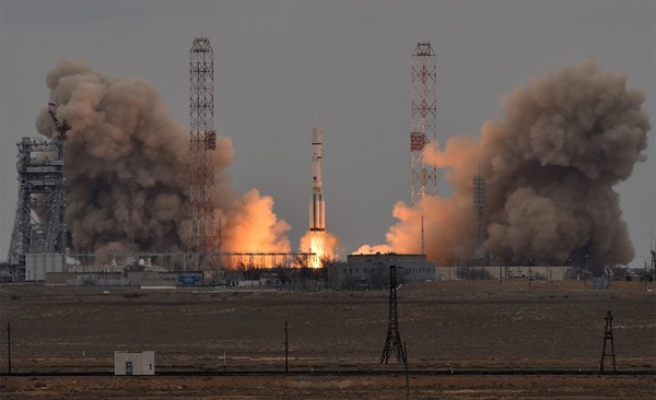 The ExoMars 2016 mission, a working collaboration between European and Russian space agencies that aims to look for life on Mars begans its mission with a blast off from Kazakhstan on Monday.

A Proton rocket carrying the Trace Gas Orbiter to examine Mars's atmosphere and a descent module that will conduct a test landing on its surface launched into an overcast sky at the Russian-operated Baikonur cosmodrome in the Kazakh steppe at 0931 GMT.

The spacecraft carried out a series of engine burns to get it onto the right trajectory to Mars and is set to finally detach from its Briz-M rocket booster just after 2000 GMT before beginning its 496-million-kilometre (308-million-mile) voyage through the cosmos.

The ExoMars 2016 mission, a collaboration between the European Space Agency (ESA) and its Russian equivalent Roscosmos, is the first part of a two-phase exploration aiming to answer questions about the existence of life on Earth's neighbour.

The Trace Gas Orbiter will examine methane around Mars while a lander dubbed Schiaparelli will detach and descend to the surface of the fourth planet from the Sun.

The landing of the module on Mars is designed as a trial run ahead of the planned second stage of the mission in 2018 that will see the first European rover land on the surface to drill for signs of life, although problems with financing mean it could be delayed.

One key goal of the Trace Gas Orbiter is to analyse methane, a gas which on Earth is created in large part by living microbes, and traces of which were observed by previous Mars missions.

"TGO will be like a big nose in space," said Jorge Vago, ExoMars project scientist.

Methane, the ESA said, is normally destroyed by ultraviolet radiation within a few hundred years, which implied that in Mars' case "it must still be produced today".

TGO will analyse Mars' methane in more detail than any previous mission, said ESA, in order to try to determine its likely origin.

One component of TGO, a neuron detector called FREND, can help provide improved mapping of potential water resources on Mars, amid growing evidence the planet once had as much if more water than earth.

A better insight into water on Mars could aid scientists' understanding of how the Earth might cope in conditions of increased drought.

Schiaparelli, in turn, will spend several days measuring climatic conditions including seasonal dust storms on the Red Planet while serving as a test lander ahead of the rover's anticipated arrival.

The module takes its name from 19th century Italian astronomer Giovanni Schiaparelli whose discovery of "canals" on Mars caused people to believe, for a while, that there was intelligent life on our neighbouring planet.

The ExoMars spacecraft was built and designed by Franco-Italian contractor Thales Alenia Space.

As for the next phase of ExoMars, ESA director general Jan Woerner has mooted a possible two-year delay, saying in January: "We need some more money" due to cost increases.

The rover scheduled for 2018 has been designed to drill up to two metres (around seven feet) into the Red Planet in search of organic matter, a key indicator of life past or present.

ESA said the rover landing "remains a significant challenge" however.

Although TGO's main science mission is scheduled to last until December 2017, it has enough fuel to continue operations for years after, if all goes well.

Thomas Reiter, director of human spaceflight at ESA, said in televised remarks ahead of the launch he believed a manned mission to Mars would take place "maybe in 20 years or 30 years".

Russian-American duo Mikhail Kornienko and Scott Kelly earlier this month returned from a year-long mission at the International Space Station seen as a vital precursor to such a mission.

The ExoMars mission will complement the work of NASA's 'Curiosity' rover which has spent more than three years on Mars as part of the Mars Science Laboratory (MSL) mission.

Curiosity, a car-sized mobile laboratory, aims to gather soil and rock samples on Mars and analyse them "for organic compounds and environmental conditions that could have supported life now or in the past," according to NASA.

Space has been one of the few areas of cooperation between Moscow and the West that has not been damaged by ongoing geopolitical tensions stemming from to the crises in Ukraine and Syria.