Most of Curiosity's drive time was spent taking pictures, including the first images of the rover's tread marks in the Martian soil. 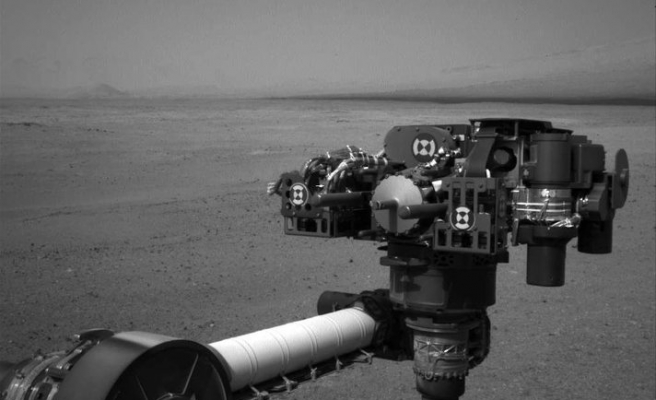 NASA's Mars rover Curiosity took a 16-minute drive on Wednesday, its first since reaching the Red Planet to search for habitats that could have supported microbial life.

The $2.5-billion, two-year mission, NASA's first astrobiology initiative since the 1970s-era Viking probes, kicked off on Aug. 6, with a risky, but successful landing on at a site NASA has named "Bradbury Landing," a nod to the late science fiction author and space aficionado Ray Bradbury.

Aside from a quick steering test earlier in the week, the one-ton rover had stood firmly on its six wheels since touching down inside an ancient impact basin called Gale Crater, located in the planet's southern hemisphere near the equator.

At 10:17 a.m. EDT on Wednesday, Curiosity became a rover, trudging out a total of 15 feet (4.5 meters), turning 120 degrees and then backing up 8 feet (2.5 meters) to position itself beside its first science target -- a scour mark left behind by the rover's descent engine.

Most of Curiosity's drive time was spent taking pictures, including the first images of the rover's tread marks in the Martian soil.

"It couldn't be more important. We built a rover, so unless the rover roves, we really haven't accomplished anything," project manager Pete Theisinger, with NASA's Jet Propulsion Laboratory in Pasadena, Calif., told reporters during a press conference.

Engineers saw no problems during Curiosity's test drive, clearing the way for a first round of analysis of rock blasted clean by the rover's landing system engine.

Curiosity is due to make a longer drive in about a week to a place where three different types of terrain come together.

"The soil is firm, great for mobility," said lead rover planner Matt Heverly. "We should have smooth sailing ahead of us."