NASA's Mars rover Curiosity, dispatched to study if the Red Planet could have hosted life, will take its first test drive on Wednesday. 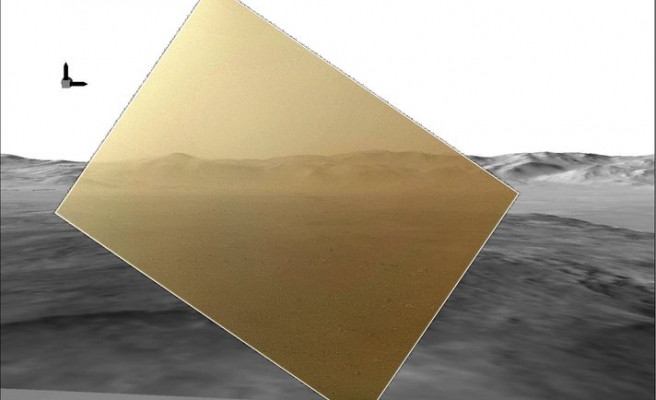 NASA's Mars rover Curiosity, dispatched to study if the Red Planet could have hosted life, will take its first test drive on Wednesday.

The one-ton, nuclear-powered robotic geologist, which landed inside a Martian crater on Aug. 6, will get instructions for a 30-minute drive, mission manager Michael Watkins told reporters on a conference call Tuesday.

Later in the day, Curiosity will drive about 10 feet (3 meters), turn its wheels, then drive back to its landing site, ending up at a 90-degree angle from where it touched down inside Gale Crater.

"We want to park in a place we've exactly examined. We just want to be extra safe," Watkins said.

Ultimately, scientists plan to drive the six-wheeled rover, which is about the size of a small car, to a 3-mile-high (5-km-high) mound of layered rock rising from the center of the crater's floor, the primary target of the $2.5 billion, two-year mission.

Scientists believe the mound, known as Mount Sharp, is the remnant of sediment that once completely filled the 96-mile-wide (154-km-wide) basin.

The rover is equipped with 10 science instruments to search for organic materials and other minerals needed to support and possibly preserve microbial life.

Determining how Mount Sharp formed might be a little more difficult with the loss of one of Curiosity's two wind sensors, designed to measure the speed and direction of the planet's often unpredictable breezes.

Engineers suspect small pebbles kicked up by the rover's landing rockets during touchdown may have hit its deck and severed delicate wires on one of the sensor's exposed circuit boards.

"These are pretty fragile devices," deputy project scientists Ashwin Vasavada said, adding the damage is believed to be permanent.

The lose of one sensor may make it more challenging for scientists to determine wind speed and direction inside Gale Crater, located near the planet's equator.

Scientists suspect that winds long ago circled inside the crater, transporting sediment that eventually built up Mount Sharp, which rises slightly above the basin's rim. Winds also likely play a role in forming and moving sand dunes that ring Mount Sharp today.

"We are trying to figure out how much sediment is going in today, how much is able to be carried out and then projecting that backward in time, using our computer simulations, to figure out basically how the mound came to be and what processes have shaped it and formed it and then eroded it over time," Vasavada said.

So far, the wind sensor is the only instrument on Curiosity that is not working properly. On Monday, the rover flexed its robot arm for the first time since landing on Mars and pivoted one of its back wheels, a preparation for Wednesday's test drive.

The arm holds a 73-pound (33 kg) turret of tools needed to collect and analyze rock and soil samples.

"The arm has already performed all these motions on Earth, but in a different gravity condition and that gravity does matter," said rover engineer Louise Jandura, with NASA's Jet Propulsion Laboratory in Pasadena, Calif.