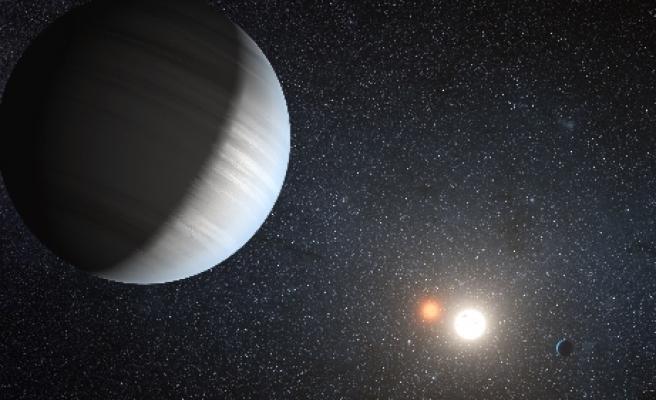 NASA's Kepler mission has discovered the first transiting circumbinary system -- multiple planets orbiting two suns -- 4,900 light-years from Earth, in the constellation Cygnus, proving that more than one planet can form and survive in orbit around a binary star. The inner planet, Kepler-47b, orbits the pair of stars in less than 50 days.

It is thought to be a sweltering world, where the destruction of methane in its super-heated atmosphere might lead to a thick haze that could blanket the planet. At three times the radius of Earth, Kepler-47b is the smallest known transiting circumbinary planet. The outer planet, Kepler-47c, orbits its host pair every 303 days, placing it in the so-called "habitable zone," the region in a planetary system where liquid water might exist on the surface of a planet.

While not a world hospitable for life, Kepler-47c is thought to be a gaseous giant, slightly larger than Neptune, where an atmosphere of thick bright water clouds might exist.