Scientists believe Jupiter was the first planet to form after the birth of the sun, though exactly how that happened is unknown. 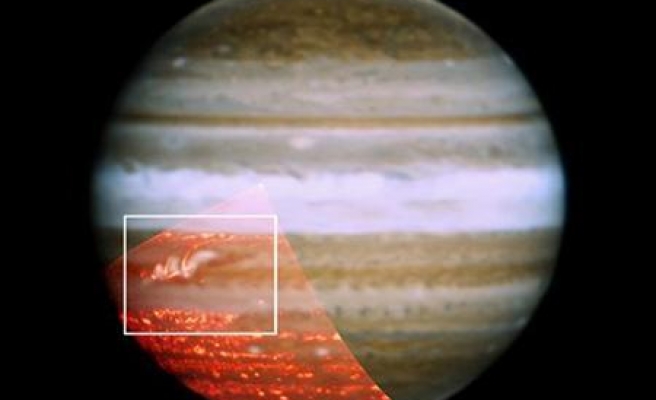 A NASA satellite was hoisted aboard an unmanned Atlas 5 rocket at Cape Canaveral Air Force Station on Wednesday in preparation for launch next week on an unprecedented mission to the heart of Jupiter.

The robotic probe called Juno is scheduled to spend one year cycling inside Jupiter's deadly radiation belts, far closer than any previous orbiting spacecraft, to learn how much water the giant planet holds, what triggers its vast magnetic fields and whether a solid core lies beneath its dense, hot atmosphere.

"Jupiter holds a lot of key secrets about how we formed," said lead scientist Scott Bolton, with the Southwest Research Institute in San Antonio, Texas.

Scientists believe Jupiter was the first planet to form after the birth of the sun, though exactly how that happened is unknown. One key piece of missing data is how much water is inside the giant planet, which circles the sun five times farther away than Earth.

Jupiter, like the sun, is comprised primarily of hydrogen and helium, with a sprinkling of other elements, like oxygen. Scientists believe the oxygen is bound with hydrogen to form water, which can be measured by microwave sounders, one of eight science instruments on Juno.

Jupiter's water content is directly tied to where -- and how -- the planet formed. Some evidence points to a planet that grew in the colder nether-regions of the solar system and then migrated inward. Other computer models show Jupiter formed at about its present location by accumulating ancient icy snowballs.

However it grew, Jupiter ended up with a mass more than twice all its sister planets combined, giving it the gravitational muscle to hang on to nearly all of its original building materials.

"That's why it's very interesting to us if we want to go back in time and understand where we came from and how the planets were made" -- which Juno can help NASA do, Bolton said.

Juno's journey to Jupiter will take five years. Upon arrival in July 2016, Juno will thread itself into a narrow region between the planet and the inner edge of its radiation belt. The solar-powered probe will then spend a year orbiting over Jupiter's poles, coming as close as 3,100 miles (5,000 km) above its cloud tops.

Only an atmospheric probe released by Galileo, NASA's last Jupiter spacecraft, has come closer, though that spacecraft was able to relay data for only 58 seconds before succumbing to the planet's crushing pressure and intense heat.

Juno's electronic heart is protected in a vault of titanium, but it too will fall to the harsh Jovian radiation environment after about a year. Juno's last move will be to dive into the planet's atmosphere to avoid any chance of contaminating Jupiter's potentially life-bearing moons.

Juno's launch is scheduled for Aug. 5. The spacecraft was built by Lockheed Martin Astronautics of Denver, Colorado. The mission, the second in NASA's lower-cost, quick-turnaround New Frontiers planetary expeditions, will cost $1.1 billion.