There were reports on Twitter of debris falling over Okotoks, a town south of Calgary in western Canada, most likely satellite remains. 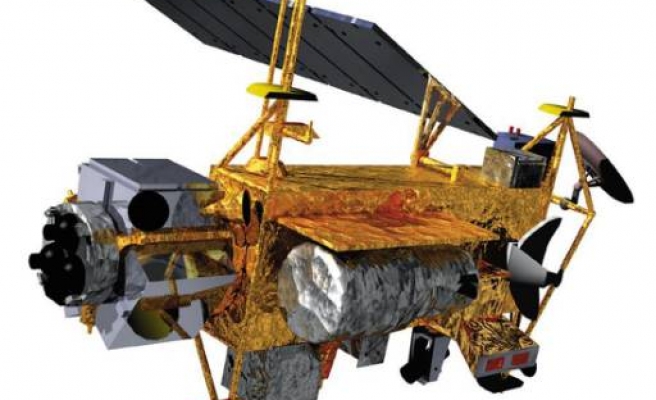 A six-tonnes NASA science satellite pierced the atmosphere over the Pacific Ocean and fell back to Earth, the U.S. space agency said on Saturday, but it was not yet known where the remains landed.

NASA said its decommissioned Upper Atmosphere Research Satellite, which took an unpredictable course as it tumbled through the upper atmosphere, fell to Earth sometime between 11:23 p.m EDT on Friday and 1:09 a.m. EDT on Saturday (0323 to 0509 GMT on Saturday).

"The precise re-entry time and location are not yet known with certainty," NASA said of the 20-year-old satellite.

There were reports on Twitter of debris falling over Okotoks, a town south of Calgary in western Canada, most likely satellite remains.

Stretching 35 feet (10.6 metres) long and 15 feet (4.5 metres) in diameter, UARS was among the largest spacecraft to plummet uncontrollably through the atmosphere, although it is a slim cousin to NASA's 75-tonnes Skylab station, which crashed to Earth in 1979.

Russia's last space station, the 135-tonnes Mir, crashed into the Pacific Ocean in 2001, but it was a guided descent.

NASA now plans for the controlled re-entry of large spacecraft, but it did not when UARS was designed.

The 13,000-pound (5,897 kg) satellite was dispatched into orbit by a space shuttle crew in 1991 to study ozone and other chemicals in Earth's atmosphere. It completed its mission in 2005 and had been slowly losing altitude ever since, pulled by the planet's gravity.

Most of the spacecraft burned up during the fiery plunge through the atmosphere, but about 26 individual pieces, weighing a total of about 1,100 pounds (500 kg) could have survived the incineration.

The debris field spans about 500 miles (805 km), but exactly where it is located depends on when UARS descended.

With most of the planet covered in water and vast uninhabited deserts and other land directly beneath the satellite's flight path, the chance that someone would be hit by falling debris was 1-in-3,200, NASA said.

"The risk to public safety is very remote," it said.

The satellite flew over most of the planet, traveling between 57 degrees north and 57 degrees south of the equator.

UARS was one of about 20,000 pieces of space debris in orbit around Earth. Something the size of UARS falls back into the atmosphere about once a year.