The Mars rover Curiosity zapped its first rock on Sunday with a high-powered laser gun designed to analyze Martian mineral content, and scientists declared their target practice a success. 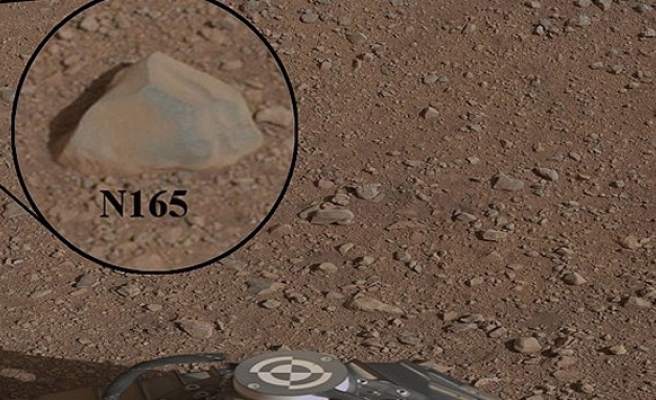 The Mars rover Curiosity zapped its first rock on Sunday with a high-powered laser gun designed to analyze Martian mineral content, and scientists declared their target practice a success.

The robotic science lab aimed its laser beam at the fist-sized stone nearby and shot the rock with 30 pulses over a 10-second period, NASA said in a statement issued from mission control at the Jet Propulsion Laboratory near Los Angeles.

Each pulse delivers more than 1 million watts of energy for about five one-billionths of a second, vaporizing a pinhead-sized bit of the rock to create a tiny spark, which is analyzed by a small telescope mounted on the instrument.

The ionized glow, which can be observed and recorded from up to 25 feet (7 meters) away, is then split into its component wavelengths by three spectrometers that give scientists information about the chemical makeup of the target rock.

The combined system, called the Chemistry-and-Camera instrument, or ChemCam, is capable of discerning more than 6,000 different wavelengths in the ultraviolet, infrared and visible light spectrum and is designed to take about 14,000 measurements throughout Curiosity's Mars mission.

The purpose of Sunday's initial use of the laser, conducted at roughly 3 a.m. Pacific time (1100 GMT), was as "target practice" for the instrument. But scientists will examine the data they receive to determine composition of the rock, which they dubbed "Coronation," NASA said.

"We got a great spectrum of Coronation - lots of signal," said ChemCam principal investigator Roger Wiens of the Los Alamos National Laboratory in New Mexico, where the instrument was developed. "After eight years of building the instrument, it's payoff time."

Curiosity, a one-ton, six-wheeled vehicle the size of a compact car, landed inside a vast, ancient impact crater near Mars' equator on Aug. 6 after an eight-month, 354-million-mile voyage through space. Its two-year mission is aimed at determining whether or not the planet most like Earth could have hosted microbial life.

The rover's primary target is Mount Sharp, a towering mound of layered rock rising from the floor of Gale Crater. But mission controllers are gradually checking out Curiosity's sophisticated array of instruments before sending it on its first road trip across the Martian landscape.

The $2.5 billion Curiosity project marks NASA's first astrobiology mission since the Viking probes to Mars during the 1970s and the most advanced robotic science lab sent to another world.

The technique employed by ChemCam has been used to examine the composition of materials in other extreme environments, such as inside nuclear reactors and on the sea floor.

The technology also has experimental applications in environmental monitoring and cancer detection. But Sunday's exercise, conducted during Curiosity's 13th full day on Mars, was the first use in interplanetary exploration, NASA said.

Before Curiosity embarks on its 4.3-mile (7-km) trek to the foot of Mount Sharp, a journey that could take six months, mission controllers plan to send it out on a shorter jaunt to a spot 1,600 feet (500 meters) from its landing site.