The pictures provide the sharpest images yet of the Apollo 12, 14 and 17 landing sites and include a photo of the boot tracks left behind in 1972 by the last U.S. astronaut to walk on the moon. 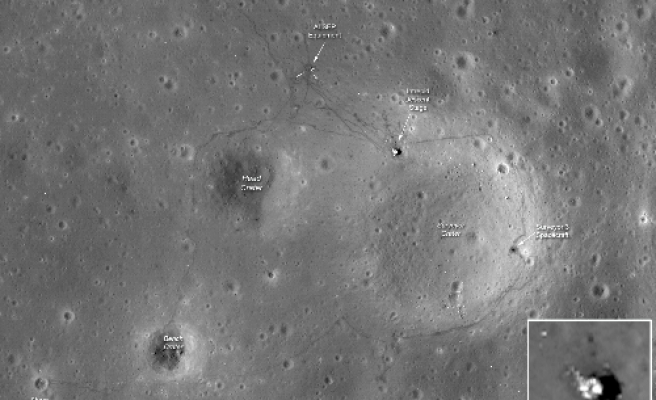 New high-resolution pictures taken by an orbiting NASA camera show clear evidence of man's lunar explorations nearly 40 years after the last U.S. spaceflight touched down on the moon, the agency said on Tuesday.

The National Aeronautics and Space Administration released three pictures on Tuesday snapped over the past month by its two-year-old Lunar Reconnaissance Vehicle.

The pictures provide the sharpest images yet of the Apollo 12, 14 and 17 landing sites and include a photo of the boot tracks left behind in 1972 by the last U.S. astronaut to walk on the moon.

"These images remind us of our fantastic Apollo history and beckon us to continue to move forward in exploration of our solar system," said Jim Green, director of the Planetary Science Division at NASA Headquarters in Washington.

The LRO has been taking pictures of the moon's surface for more than two years. But scientists made an adjustment to its orbit in August that helped produce the higher resolution images.

The maneuver temporarily lowered the LRO from its usual orbiting altitude of approximately 31 miles (50 kilometers) from the moon's surface to as low as 13 miles (21 kilometers).

The spacecraft remained in the lower orbit for four weeks, long enough for the moon to completely rotate and for the LRO wide angle camera to get the pictures of the three landing sites and the trails astronauts left in the moon's thin soil as they stepped out of the relative safety of their lunar modules and explored the moon on foot.

As lawmakers in Washington move to cut federal spending and reduce the deficit, the U.S. space agency is fighting to retain funding for human spaceflight.

In July, NASA's 26-year-old space shuttle program completed its last flight. The agency had hoped to resume its moon program but that program was shelved last year because of budget cuts.