The nearly complete fossilized skeleton is of a thalattosaur shallow waters in the early days of dinosaurs and became extinct at the end of the Triassic period some 200 million years ago. 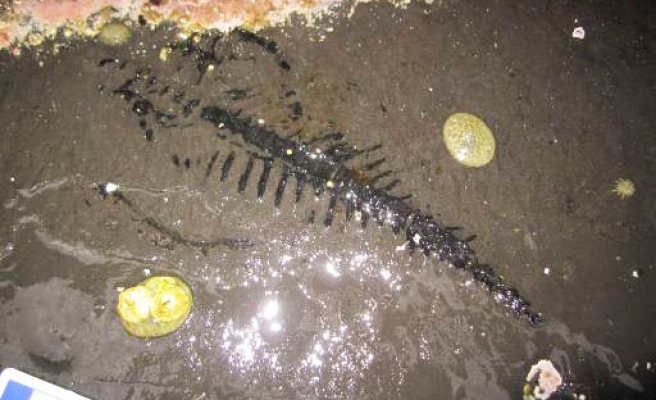 Alaska scientists have discovered the fossil of a rare, prehistoric marine reptile that is likely the most complete remnant of the creature ever found in North America.

The nearly complete fossilized skeleton is of a thalattosaur, a long-tailed sea creature that plied warm, shallow waters in the early days of dinosaurs and became extinct at the end of the Triassic period some 200 million years ago.

The discovery of the fossil, found during an extreme low tide along the shore of the Tongass National Forest, was announced this week by the Museum of the North at the University of Alaska, Fairbanks.

"We were just having our morning coffee out on the outcropping when somebody said, 'What's that?'" Jim Baichtal, the U.S. Forest Service's Tongass geologist and part of the discovery team, said on Thursday.

Geologists had been conducting field surveys at the site when the fossil was spotted.

Unlike most thalattosaur discoveries, which are fossilized remnants of individual bones and bone fragments, this specimen appeared to be a nearly full skeleton.

"In North America, this may be the most articulated specimen that we have right now," Baichtal said.

Scientists excavated the fossil in June and have been studying it to determine whether it represents a previously unknown species.

There are only about a dozen full thalattosaur specimens in the world, Baichtal said. "So the probability of this being something that wasn't seen before is probably pretty high," he said.

The find is likely the most northern discovery as well, Baichtal said. The fossil was found near the Tlingit Indian village of Kake in southeast Alaska.

At the time this particular animal was trapped in sediment, about 200 million to 220 million years ago, the site was close to the equator and tropical, Baichtal said.

"This was a warm, volcanic island with reefs surrounding it," similar to Hawaii, he said. Plate tectonics eventually sent the site drifting north to its current location in Alaska, he said.

The fossil from the Tongass beach is now at the Museum of the North, where scientists will do further work to separate the rock from the bone.

Thalattosaurs inhabited the seas for about 30 million years, a relatively brief time geologically, said Pat Druckenmiller, earth sciences curator for the Museum of the North. They measured about 3 to 10 feet (1-3 metres) long, with half to a third of that taken up by the tail, he said.

"The rest of its body would be kind of reminiscent of a big lizard," he said, with legs modified to work as paddles.

The Alaska fossil appears to include the outline of soft-body tissue that surrounded the bone.

"That's really rare," Druckenmiller said. "That might give us some idea of what the actual body shape was."

Scientists will return to the site later to try to excavate the rest of the fossil, still embedded in beach rock, Druckenmiller said.