Smoke from forest fires smothering Moscow adds to health problems of "brown clouds" from Asia to the Amazon and Russian soot may stoke global warming by hastening a thaw of Arctic ice. 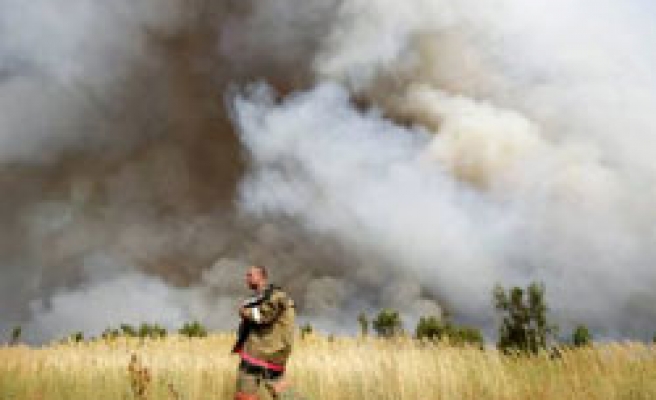 Smoke from forest fires smothering Moscow adds to health problems of "brown clouds" from Asia to the Amazon and Russian soot may stoke global warming by hastening a thaw of Arctic ice, environmental experts say.

"Health effects of such clouds are huge," said Veerabhadran Ramanathan, chair of a U.N. Environment Programme (UNEP) study of "brown clouds" blamed for dimming sunlight in cities such as Beijing or New Delhi and hitting crop growth in Asia.

The clouds -- a haze of pollution from cars or coal-fired power plants, forest fires and wood and other materials burnt for cooking and heating -- are near-permanent and blamed for causing chronic respiratory and heart diseases.

"In Asia just the indoor smoke -- because people cook with firewood -- causes over a million deaths a year," Ramanathan, of the University of California, San Diego, told Reuters.

Moscow's top health official said on Monday that about 700 people were dying every day, twice as many as in normal weather, as Russia grapples with its worst heat wave in 130 years.

"The Russian fires are in principle similar to what you see from other brown clouds," said Henning Rodhe of Stockholm University, a vice-chair of the UNEP Atmospheric Brown Cloud study. "The difference is that this only lasts a few weeks."

Asian pollution has been blamed for dusting Himalayan glaciers with black soot that absorbs more heat than reflective snow and ice and so speeds a thaw. Worldwide, however, the polluting haze blocks out sunlight and so slows climate change.

For the climate, "the main concern ... is what impact the Russian smoke would have on the Arctic, in terms of black carbon and other (particles) in the smoke settling on the sea ice," Ramanathan said.

In past years "we have had episodes of biomass burning that have brought clouds in over the Arctic," said Kim Holmen, director of research at the Norwegian Polar Institute.

Holmen, who runs a pollution monitoring station in Svalbard in the high Arctic, said the air over Russia was fairly stable in recent days, concentrating smoke over land. But a shift in winds, easing pollution in Moscow, could sweep smog northwards.

Arctic sea ice, which shrinks in mid-September to an annual minimum before the winter freeze, now covers a slightly bigger area than in 2007 and 2008, the smallest extents since satellite measurements began in the 1970s.

The exposure of Arctic Ocean water to sunlight is a threat to the livelihoods of Arctic peoples and creatures such as polar bears. It also accelerates global warming, blamed by the U.N. panel of climate experts on mankind's use of fossil fuels.

"Such conditions are likely to become more common in the future," Rodhe said of the Russian heatwave and related fires.

Asia is most studied for brown clouds but they also form over parts of North America, Europe, the Amazon basin and southern Africa. Burning of savannah in sub-Saharan Africa, to clear land for crops, is a new source.

Holmen also echoed Russian authorities' worries that the fires may also release radioactive elements locked in vegetation since the Chernobyl nuclear disaster of 1986.

Radioactive isotopes include strontium 90 and caesium 137. Other industrial pollutants such as PCBs could also be freed.