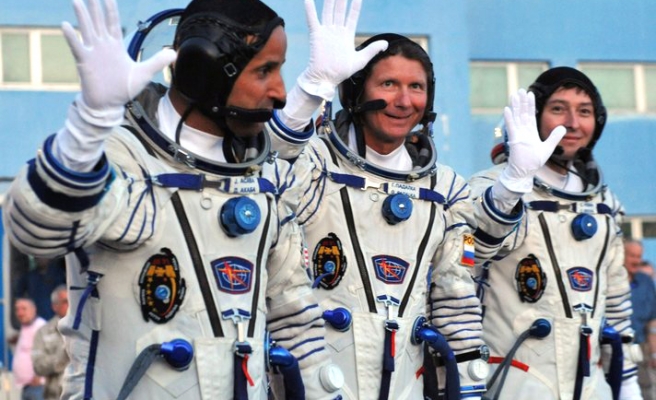 A trio of Russian, Japanese and U.S. astronauts blasted off aboard a Soyuz spaceship on Sunday for a four-month mission on the International Space Station (ISS) that Moscow hopes will help restore confidence in its space programme.

"The Soyuz had a very smooth ride into space," a spokesman for NASA said during a live broadcast on the agency's television channel. The rocket blazed a bright orange trail through cloudy skies above the Kazakh steppe.

Since the retirement of the space shuttles last year, the United States is dependent on Russia to fly astronauts to the ISS, which costs the nation $60 million per person.

Moscow hopes a successful mission will help to restore confidence in its once-pioneering space programme after a string of launch mishaps last year, including the failure of a mission to return samples from the Martian moon Phobos.

The previous Soyuz launch on May 15 was delayed by more than one month to allow Russia's partly state-owned space contractor, RKK Energia, to prepare a new capsule for launch after an accident during pressure tests damaged the Soyuz crew capsule.

There were no such delays with Sunday's launch.

"The most tense, the most difficult part (of the launch) has been successfully implemented," said Vladimir Popovkin, head of Russian space agency Roscosmos.

"I have just spoken to the crew. They are feeling great," Russian news agencies quoted Popovkin as saying in Baikonur. "I have no doubts that all will go according to plan."

Malenchenko, a 50-year-old cosmonaut on his fifth space voyage, loosened his straps about 20 minutes after blast-off after conducting air pressure checks.

Asked by Mission Control how the crew was feeling, he replied: "Good." A doll given to Malenchenko by his daughter dangled from the roof of the capsule.

Williams and Hoshide are both on their second space flight and their first aboard a Soyuz spacecraft. They, along with Malenchenko, are scheduled to return to Earth in mid-November.

At the end of May, this crew released Space Exploration Technologies' unmanned Dragon cargo, which arrived as part of a test flight and was the first privately owned spaceship to reach the 15-nation ISS project.

Although China is far from catching up with the United States and Russia, the Shenzhou 9 marked China's fourth manned space mission since 2003 and comes as budget restraints and shifting priorities have held back U.S. manned space launches.