Scientists find dinosaur that was scourge of Jurassic Europe 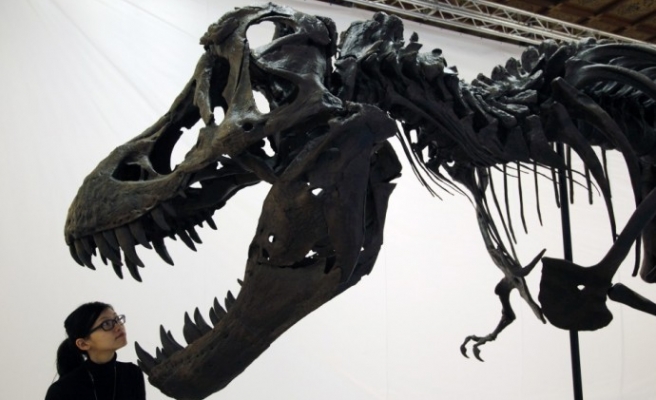 In Europe 150 million years ago, this dude was the biggest, baddest bully in town.

Two scientists in Portugal announced on Wednesday that they have identified the largest carnivorous dinosaur ever found in Europe, a 33-foot-long (10-meter-long) brute called Torvosaurus gurneyi that was the scourge of its domain in the Jurassic Period.

"It was indeed better not to cross the way of this large, carnivorous dinosaur," said paleontologist Christophe Hendrickx of Universidade Nova de Lisboa and Museu da Lourinhã in Portugal.

Torvosaurus gurneyi was an imposing beast. It was bipedal, weighed four to five tons, had a skull almost 4 feet long (1.2 meters), boasted powerful jaws lined with blade-shaped teeth four inches (10 cm) long, and may have been covered with an early type of feather, Hendrickx said.

Remains of the new species were unearthed in Portugal by an amateur fossil hunter in 2003 in the rock cliffs of Lourinhã, a small town about 45 miles (72 km) north of Lisbon, Hendrickx said. He said fossilized embryos probably belonging to this species were identified last year in Portugal.

The findings were published in the journal PLOS ONE.

At the time that Torvosaurus prowled the landscape, the region was a lush river delta with abundant fresh water and vegetation. The area teemed with dinosaurs and flying reptiles known as pterosaurs, primitive birds, crocodiles, turtles and mouse-sized mammals, according to paleontologist Octávio Mateus, also of Universidade Nova de Lisboa and Museu da Lourinhã.

The two scientists said this is the second species of the genus Torvosaurus. The other one, Torvosaurus tanneri, lived at the same time in North America. It was known from the states of Colorado, Utah and Wyoming and was identified in 1979.

Torvosaurus gurneyi was not the only meat-eating dinosaur in its neighborhood. For example, there was a European species of the well-known North American Jurassic predator Allosaurus, but the Torvosaurus found in Portugal was larger.

Torvosaurus gurneyi not only is the largest known meat-eating dinosaur from Europe, but is the biggest land predator of any kind ever found on the continent, they added.

There were larger dinosaur carnivores elsewhere, however.

Tyrannosaurus in North America, Carcharodontosaurus and Spinosaurus in North Africa and Giganotosaurus in Argentina all were bigger, but appeared on Earth much later than Torvosaurus, during the Cretaceous Period that followed the Jurassic Period.

"This animal, Torvosaurus, was already a fossil for 80 million years before the T. rex ever walked the Earth," Mateus said.