The research is part of a U.S.-Canada Extended Continental Shelf Survey expedition that started last year to study little-understood areas of the Arctic, the USGS said. 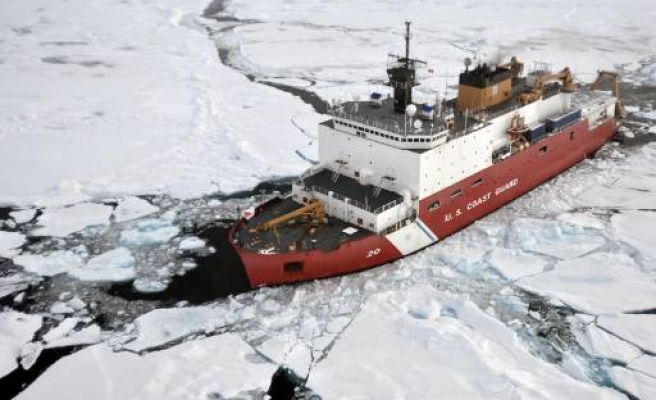 Scientists from the U.S. Geological Survey will embark next week on an expedition to monitor acidification trends in the Arctic Ocean linked to carbon emissions, the agency said.The USGS scientists will spend seven weeks on a Coast Guard icebreaker, getting as close to the North Pole as possible to take water samples and test for chemical indicators of acidification, officials said.

Carbon emissions are blamed for altering the chemistry of the world's oceans by making them more acidic, which makes it more difficult for fish and other sea life to grow and live.

The Arctic Ocean is considered especially vulnerable to acidification because of the cold temperatures and already-low level of calcium saturation, Lisa Robbins, a USGS oceanographer going on the trip, said in an interview.

The research is part of a U.S.-Canada Extended Continental Shelf Survey expedition that started last year to study little-understood areas of the Arctic, the USGS said.

Yet there has been little field data about acidification collected from the Arctic Ocean, compared to marine waters in temperate and tropical zones, Robbins said.

Ocean acidification refers the process by which ocean waters absorb carbon dioxide from the atmosphere, causing chemical changes in the alkaline-acid balance, or pH level, that makes the ocean more acidic.

Since oceans currently absorb more than a quarter of the greenhouse gases in the atmosphere, there are growing concerns about acidification and its effects on marine life, Robbins said.

"There might be reduced shell formation in some organisms," she said. That could hinder the growth of numerous forms of sea life, from plankton on up, she said.

"It will affect the whole food chain," Robbins said.

The seven-week research cruise, being coordinated with the U.S. Coast Guard and the Canadian Coast Guard, is scheduled to start on Monday in Barrow, the nation's northern-most city, the USGS said.