Sunspot 1302 was large enough to be seen without a telescope from Earth, though that would be unadvisable because it could hurt human eyes. 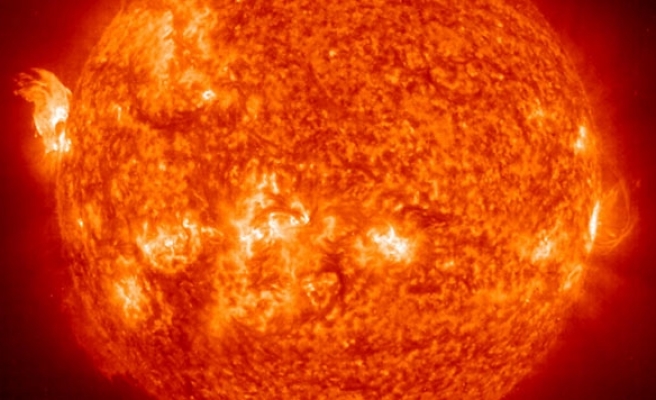 "The current storm is probably at its end," said Joe Kunches, a scientist at NOAA's Space Weather Prediction Center in Boulder, Colorado. "It seems that the solar wind that was really energized ... seems to have passed us by."

At its height, the storm was rated as strong-to-severe by NASA's Goddard Space Weather Lab outside Washington D.C.

The storm of charged particles from the Sun -- the solar wind -- was generated after the huge sunspot 1302 threw off a coronal mass ejection of solar material -- a flare -- early Saturday, the NASA lab said in a statement.

Sunspot 1302 was large enough to be seen without a telescope from Earth, though that would be unadvisable because it could hurt human eyes. It is about 99,000 miles (160,000 km) across, big enough to fit more than 10 Earths lined up side by side.

The solar storm generated by the coronal mass ejection was G3 on a scale that ranges from G1 to G5, the National Oceanic and Atmospheric Administration said in a statement.

The flare itself was an X1.9 category blast, near the top of the scale scientists use to define the power of a solar event, but that is not uncommon during this phase of the sun's 11-year solar cycle, according to Alex Young, a scientist at Goddard.

"I wouldn't say that it's rare at this particular time in the cycle," Young said by telephone. "We're about two years away from the peak of the 11-year solar cycle."

Solar activity should peak sometime in mid-2013, he said.

Solar storms can interfere with satellites, power grids and navigation systems such as GPS, but there was little evidence that this storm had much damaging impact. People in extreme northern latitudes may see heightened auroras.

That may be because of the location of the sunspot that started it: sunspot 1302 was located near the edge of the disc of the Sun that we see from Earth, and therefore delivered what NOAA called a "glancing blow" to the magnetic field that surrounds our planet.

If the storm had been directed straight at Earth, NOAA said, "the geomagnetic storming could have reached 'severe' to 'extreme' levels."

As the Sun rotated and Earth moved around it over the last three days, the sunspot came in range to deliver a direct hit, but that is not forecast, Kunches said.

"Since the eruptions over the weekend, it seems that the parent of the activity (sunspot 1302) ... has relaxed a little bit," he said.

Of sunspots, he said, "They grow, they twist, they erupt and they go back to a more happy state and they're kind of in that happy state right now."