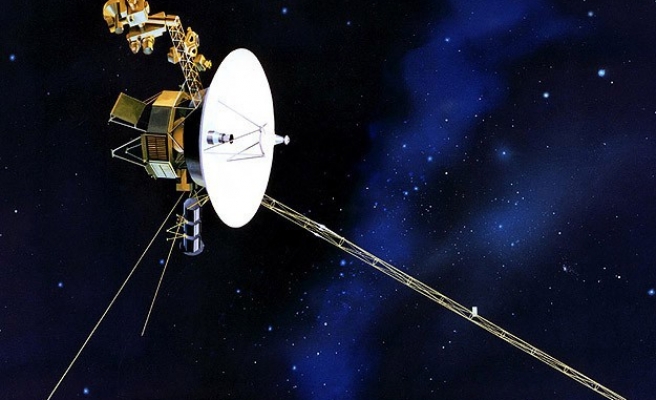 Robot probe Philae has become the first spacecraft to land on a comet.

The lander touched down on Comet 67P/Churyumov-Gerasimenko at about 1605 GMT after separating from its mothercraft Rosetta seven hours earlier, the European Space Agency announced from Darmstadt in Germany.

A few seconds later, the agency said that it had received signals from Philae2014 on surface of comet #67P.

"We see the probe sitting on the ground. We've definitely confirmed that the lander is on the surface," Rosetta Flight Director Andrea Accomazzo said.

After landing, it seemed that there was a problem with the harpoon system that was supposed to fire to give Philae the ability to stay in place.

"I’m on the surface but my harpoons did not fire. My team is hard at work now trying to determine why, " tweeted Philea. Its mothercraft Rosetta tweeted back "Hang on in there Philae!"

The probe had earlier separated from Rosetta in a dangerous maneuver, and headed towards the surface of the comet, which is in motion at more than 80,000 miles (128,747 kilometers) per hour.

“We are the first to do this - and this achievement will exist forever,” said Jean Jacques Dordain, Director General of the agency.

One of the agency's engineers commented: "Science fiction is becoming scientific reality today, Hollywood is good but Rosetta is better."

Agency scientists said that Philae put off its landing gear and is fixed on the surface of the comet. They explained that their main concern for the time being is that Philae stays stable.

"In the next hours we’ll learn exactly where and how we’ve landed, and we’ll start getting as much science as we can from the surface of this fascinating world," said Stephan Ulamec, Philae Lander Manager at the DLR German Aerospace Center.

Rosetta was launched on March 2, 2004 from Kourou in French Guiana and has covered a distance of approximately 3.7 billion miles (six billion kilometers). It is now 10 years into its mission.

It chased the giant lump of ice and dust around the solar system before finally reaching it on August 6.

The spacecraft famously "woke up" after a 31-month-long hibernation period in January, tweeting: "Hello World."

“Rosetta is trying to answer the very big questions about the history of our Solar System. What were the conditions like at its infancy and how did it evolve? What role did comets play in this evolution? How do comets work?” said Matt Taylor,  Rosetta project scientist.

France' s Prime Minister Manuel Valls tweeted: "France and Europe have achieved a historic accomplishment in the history of space exploration. Let us be proud."

President Francois Hollande also witnessed the landing of the robot at the agency headquarters in Paris.

"For those who are wondering, what is Europe is for, Rosetta has given them an answer," Hollande said.

According to an agency press release, Philea lander 's mission can be extended until March 2015, after which conditions inside the lander are expected to be too hot for it to continue operating as the comet will be approaching the Sun.

The comet will reach its closest distance to the Sun on August 13, 2015 at about 185 million kilometers (114.9 million miles), roughly, between the orbits of Earth and Mars. Rosetta will follow it throughout the remainder of 2015, as it heads away from the Sun and its activity nears an end.

One of Philea's primary mission phases is to provide a full panoramic view of the landing site, including a section in 3D, high-resolution images of the surface immediately underneath the lander, on-the-spot analysis of the composition of the comet’s surface materials, and a drill that will take samples from a depth of 23 centimeters (9.1 inches) and send them to an onboard laboratory for analysis.

The lander will also measure the electrical and mechanical characteristics of the surface.

“It’s been an extremely long and hard journey to reach today’s once-in-a-lifetime event, but it was absolutely worthwhile. We look forward to the continued success of the great scientific endeavor that is the Rosetta mission as it promises to revolutionize our understanding of comets,” said Fred Jansen, Rosetta mission manager.