According to optical and X-ray data, the CoRoT-2 system is estimated to be between about 100 million and 300 million years old, meaning that the star is fully formed. 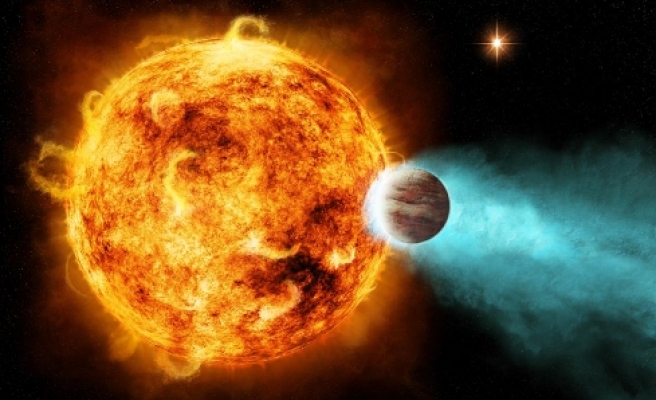 A nearby star is pummeling a companion planet with a barrage of X-rays 100,000 times more intense than the Earth receives from the sun

New data from NASA's Chandra X-ray Observatory and the European Southern Observatory's Very Large Telescope suggest that high-energy radiation is evaporating about 5 million tons of matter from the planet every second. This result gives insight into the difficult survival path for some planets.

The planet, known as CoRoT-2b, has a mass about three times that of Jupiter -- 1,000 times that of Earth -- and orbits its parent star, CoRoT-2a at a distance roughly 10 times the distance between Earth and the moon.

The CoRoT-2 star and planet -- so named because the French Space Agency's Convection, Rotation and planetary Transits, or CoRoT, satellite discovered them in 2008 -- is a relatively nearby neighbor of the solar system at a distance of 880 light years.

"This planet is being absolutely fried by its star," said Sebastian Schroeter of the University of Hamburg in Germany. "What may be even stranger is that this planet may be affecting the behavior of the star that is blasting it."

According to optical and X-ray data, the CoRoT-2 system is estimated to be between about 100 million and 300 million years old, meaning that the star is fully formed. The Chandra observations show that CoRoT-2a is a very active star, with bright X-ray emission produced by powerful, turbulent magnetic fields. Such strong activity is usually found in much younger stars.

"Because this planet is so close to the star, it may be speeding up the star's rotation and that could be keeping its magnetic fields active," said co-author Stefan Czesla, also from the University of Hamburg. "If it wasn't for the planet, this star might have left behind the volatility of its youth millions of years ago." Support for this idea come from observations of a likely companion star that orbits CoRoT-2a at a distance about a thousand times greater than the separation between the Earth and our sun. This star is not detected in X-rays, perhaps because it does not have a close-in planet like CoRoT-2b to cause it to stay active.

Another intriguing aspect of CoRoT-2b is that it appears to be unusually inflated for a planet in its position.

"We're not exactly sure of all the effects this type of heavy X-ray storm would have on a planet, but it could be responsible for the bloating we see in CoRoT-2b," said Schroeter. "We are just beginning to learn about what happens to exoplanets in these extreme environments." These results were published in the August issue of Astronomy and Astrophysics. The other co-authors were Uwe Wolter, Holger Mueller, Klaus Huber and Juergen Schmitt, all from the University of Hamburg.