Summer Arctic sea ice melt at or near record

The five biggest melts in a 32-year satellite record have all happened in the past five years, likely a result of both manmade climate change and natural weather patterns. 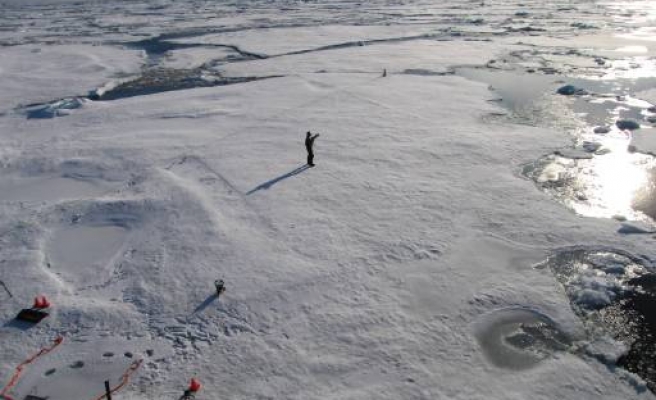 Arctic sea ice this summer melted to a record low extent or will come a close second, two different research institutes said on Tuesday, confirming a trend which could yield an ice-free summer within a decade.

The five biggest melts in a 32-year satellite record have all happened in the past five years, likely a result of both manmade climate change and natural weather patterns.

One impact of an ice-free summer may be disrupted world weather, with hints already as some scientists blame recent chill winters in Europe and North America on warmer, open Arctic seas diverting polar winds south.

Researchers at the University of Bremen in Germany say that this year has already toppled 2007 after sea ice retreated to a record low on September 8.

The U.S.-based National Snow and Ice Data Center (NSIDC) says this year is number two with the melt season all but over before winter returns to the high Arctic.

"I'm increasingly confident it will remain number two," said Mark Serreze, head of the NSIDC. But the result may be close enough to declare a tie, he added.

Most important than the record was the trend, said University of Bremen's Georg Heygsterall, referring to how the years since 2007 had all since bigger summer melts than those before.

A tie would echo the World Meteorological Organisation's view on recent rising global temperatures, after it declared 2010 a tie with 1998 and 2005 for the hottest year since such records began about a century and a half ago.

Bremen and NSIDC use satellites to measure microwave radiation from the ice pack, but with slightly different methods: NSIDC can achieve a sharper image, but Bremen to a higher resolution of 6 kilometres compared with 25 km.

"An 'ice-free' summer Arctic is rapidly on its way. Most data indicate that the models are underestimating the rate of ice-loss," said Kim Holmen, research director at the Norwegian Polar Institute.

"That means that we see more rapid change than the model scenarios have suggested. It also means that there are processes out there that influence ice that we have yet to understand."

The summer ice retreat has already reached levels which were forecast three decades from now in models used in the U.N. climate panel's flagship report four years ago.

The Intergovernmental Panel on Climate Change (IPCC) used models which forecasted an ice-free summer at the end of this century.

But that could happen as early as 2013, according to one of the most aggressive estimates. Other experts predict an ice-free Arctic Ocean in summer anywhere from 2020-2050.

"I still see a high likelihood of a near ice-free Arctic Ocean during summer around 2016, plus or minus three years," said Wieslaw Maslowski at the California-based Naval Postgraduate School.

More difficult to measure than area is ice thickness, which is also diminishing, most scientists agree.

Researchers at the University of Washington in Seattle calculated ice volume, combining area and thickness, reached a record low last year and would do so again this year.