Excessive radiation levels have also been found in beef, vegetables, milk, seafood and water and, in hot spots more than 100 km from the plant, tea. 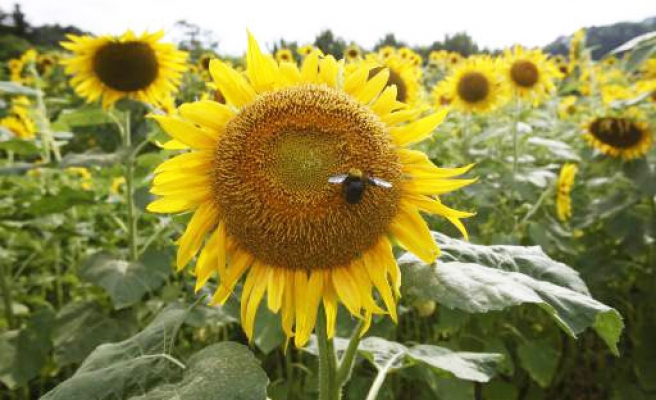 Sparks from burning strips of paper swirled into the hot summer sky, carrying the names of the dead above a temple in Fukushima where thousands of sunflowers have been planted to help fight the omnipresent radiation.

The Fukushima Daiichi nuclear plant some 50 km away suffered a series of core meltdowns and explosions after the massive March 11 earthquake and tsunami knocked out cooling systems, setting off the world's worst nuclear accident in 25 years and forcing tens of thousands from their homes.

"It is as if an invisible snow had fallen on Fukushima and continued to fall, covering the area," said Koyu Abe, chief monk at the Buddhist Joenji temple.

"This snow, which doesn't melt, brought a long, long winter to Fukushima."

Some 80,000 people were forced to evacuate from a vast swathe of land around the reactor as engineers battled radiation leaks, hydrogen explosions and overheating fuel rods -- and have no idea when, if ever, they can return to homes that have been in their families for generations.

Worse still, radiation spread well outside the mandatory evacuation zone, nestling in "hot spots" and contaminating the ground in what remains a largely agricultural region.

Rice, still a significant staple, has not been planted in many areas. Others face stringent tests and potentially harmful shipping bans after radioactive cesium was found in rice straw.

Excessive radiation levels have also been found in beef, vegetables, milk, seafood and water and, in hot spots more than 100 km from the plant, tea.

In an effort to lift the spirits of area residents as well as lighten the impact of the radiation, Abe began growing and distributing sunflowers and other plants.

"We plant sunflowers, field mustard, amaranthus and cockscomb, which are all believed to absorb radiation," said the monk.

"So far we have grown at least 200,000 flowers (at this temple) and distributed many more seeds. At least 8 million sunflowers blooming in Fukushima originated from here."

Some of the 100 volunteers helping him with his project bustled around lighting candles in preparation for Obon, a festival honoring the spirits of the dead.

Later, Buddhist chants echoed the buzz of cicadas from nearby trees as Abe burned paper inscribed with the names of the dead, a ritual in which their spirits are symbolically "reunited" with their neighborhood, and encouraged temple visitors to take home flowers and seeds of their own.

Sunflowers were used near Chernobyl after the 1986 nuclear accident there to extract radioactive cesium from contaminated ponds nearby. Japanese scientists are also carrying out tests to prove their usefulness in fighting radiation.

But Abe decided not to wait for the results of the tests, believing that by taking action his team could help battered local towns shake off a sense of stagnation and give them hope.

His plan seems to be working.

"We've been so busy with hundreds of locals coming to collect the flowers. It helps me forget about radiation too," said Tomoe, a 38-year-old volunteer who declined to give her last name.

Cheerful fields of sunflowers in unusual locations, such as unused paddy fields, can now be seen across the area, tucked between deep green hills and lush forests.

"I planted the sunflowers from the temple alongside other vegetables, hoping they would suck up radiation," said Mura Akiba, a local villager weeding her garden.

A dosimeter placed next to her registered radiation levels of more than 5 microsieverts per hour, far exceeding government safety levels. Her house is located near a radioactive hot spot.

"I'm so ashamed to go to a shop to buy fruit and vegetables -- I have never done this before in my life," she added.

"But now I just stare at my blueberries and blackberries as they grow in my garden, thinking I won't be able to eat them this year."

As more people came to collect flowers at the temple, they confided to Abe their worries about radioactive contamination of the soil in their gardens. With the government still far from a decision on how to handle such soil, Abe decided to take it himself, storing it on the vast temple grounds.

"To overcome this disaster, we should accept that it has already happened and face the reality. Then we should pursue what we can do at this very moment, what impact can we make and how each and one of us can diligently work to improve the situation."