The arrests came as Cambodia prepares its first Cyber Crime law, a draft of which has been criticised as contains measures meant to silence criticism of government. 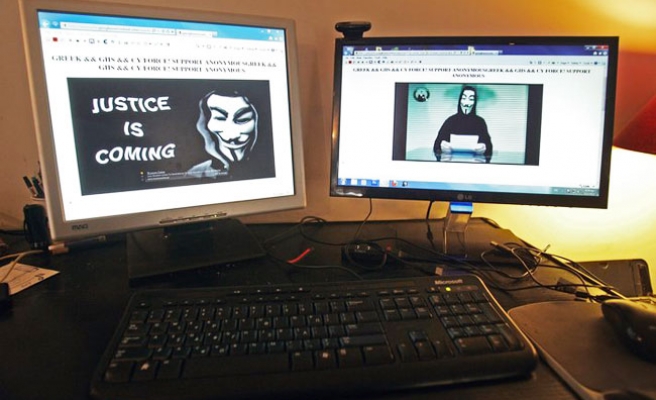 The two 21-year-old information technology students, Bun Khing Mongkul Panha - who uses the online name Black Cyber - and Chou Songheng - who goes by the alias Zoro - were arrested in early April following a months-long investigation by Cambodian authorities with the help of the FBI, according to The Cambodia Daily newspaper.

The two are accused of hacking the Ministry of Foreign Affairs and National Election Committee (NEC) websites among others - taking them offline or replacing them with pictures of a masked Guy Fawkes, Anonymous’ symbol, and could face up to two years in prison.

“The National Police were cooperating with the FBI to conduct an investigation when we found these two suspects hacked the NEC...and other government institutions,” the Daily quoted Chhay Sinarith, head of the Interior Ministry’s internal security department, as saying.

Anonymous Cambodia became especially active in the wake of July’s disputed national elections and the mass protests that followed, with the group launching what it dubbed “Operation Cambodia Freedom” and “declaring war” on the Cambodian government in September after police opened fire on anti-government demonstrators killing one person.

In an interview with The Cambodia Daily last year, Black Cyber mocked the Cambodian government’s online security saying that when he hacked into the website of the Anti-Corruption Unit: “Their password was as simple as 1, 2, 3, 4, 5.”

The arrests come as the Cambodian government is in the process of drafting its first Cyber Crime law, a draft of which has been criticised by rights groups as containing measures that are meant to silence Internet users critical of the government.

On its Twitter page shortly after the draft law was leaked, Anonymous Cambodia wrote: “#OpCambodia is a go. Cambodia's government is trying to censor their Internet.”

Cambodia’s Internet usage is currently unobstructed though only about 3 percent of the poor South-east Asian nation’s population have Internet access. Those who do have become increasing vocal over the past year, with many young Cambodians taking to social media sites such as Facebook and Twitter to air their political views and grievances.