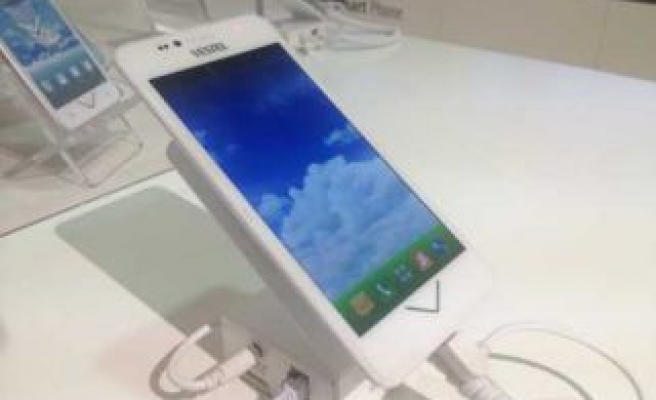 “With its stylish design and advanced technology that hold their own against global brands, our smartphone, Venus, demonstrates Vestel’s commitment to developing and manufacturing high-tech products,” Vestel Group CEO Turan Erdogan said at an unveiling Thursday in Berlin, on the sidelines of Europe’s largest electronics trade show, IFA.

Erdogan said that Vestel, one of Europe’s largest TV producers, has now positioned its smartphone as a leading product in its vision of the future.

Vestel announced that its Android-based Venus will be available for public purchase Sept. 22 with two different models -- Venus X, with sharp lines, and Venus V, with a more rounded design.

Both models will be available with 5.0” and 5.5” display options as well as a choice of black and white colors, Erdogan told journalists and guests at the unveiling event.

The most remarkable features of the Venus 5.5” are said to be its 13-megapixel camera, 16GB hard drive, the 4G LTE and NFC technologies. Venus 5.0” on the other hand was presented as desirable for its long battery life.

Erdogan said Venus was a product of Turkish design and manufacture, developed by Turkish engineers at Vestel City in Manisa.

“Vestel is Turkey’s first and only smartphone manufacturer and one of the very few firms in Europe capable of manufacturing smart phones with proprietary technology and original design,” he said.

“We are going to exploit this capability of ours to the utmost on the domestic and international markets," he said. "Our aim is to manufacture 3 million units annually by the end of the next three years, with 1 million to be exported.”

Erdogan said that, for the export of smartphones, Vestel plans to focus on the European market.

“Vestel’s business volume with many European retailers is on the rise and we are going to turn this into a major opportunity in smart phone sales, as well,” Erdogan said.

He said the rapid growth in the mobile market afforded Vestel remarkable opportunities.

Erdogan said that, together with the smartphones, smart home technologies were a key for Vestel’s vision of future.

“Smart home technologies, which are cited among the trends of the future, are now ready to make their way into our homes with Vestel,” he said.

Vestel is presenting 618 different products in its 3,000-square-meter stand at IFA.

Vestel’s four-door refrigerator, washing machine, oven and air conditioner that can be remotely controlled via a smart TV, tablet or smart phone are among the most notable exhibits.

“Not only do we manufacture smart phones but we also design smart home systems that have all technologies from electronics to white goods communicating with each other,” Erdogan said.