Young, nearby supernova dazzles US scientists

The detection so early of a supernova so near has created a worldwide stir among astronomers, who are clamoring to observe it with every telescope at their disposal, including the giant Hubble Space Telescope. 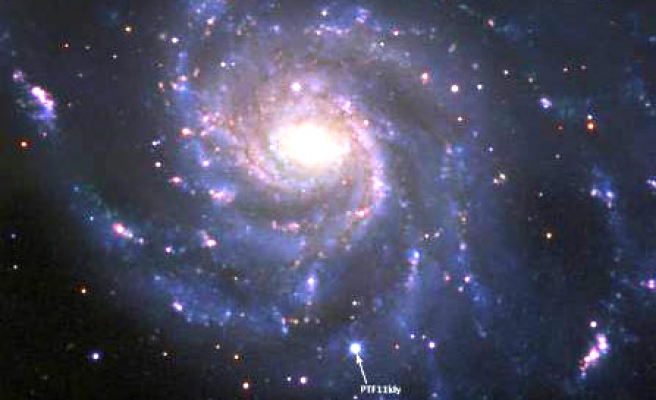 California astronomers have found the closest, brightest supernova of its kind in 25 years, catching the glimmer of a tiny self-destructing star a mere 21 million light years from Earth and soon visible to amateur skywatchers.

The discovery, announced on Wednesday, was made in what was believed to be the first hours of the rare cosmic explosion using a special telescope at the Palomar Observatory near San Diego and powerful supercomputers at a government laboratory in Berkeley.

The detection so early of a supernova so near has created a worldwide stir among astronomers, who are clamoring to observe it with every telescope at their disposal, including the giant Hubble Space Telescope.

Scientists behind the discovery at the Lawrence Berkeley National Laboratory and the University of California at Berkeley say the extraordinary phenomenon -- labeled by the rather obscure designation PTF 11kly -- will likely become the most-studied supernova in history.

"It is an instant cosmic classic," said Peter Nugent, the senior scientist at UC Berkeley who first spotted it.

PTF 11kly occurred in the Pinwheel Galaxy, located in the Ursa Major constellation, better known as the Big Dipper. At a distance of roughly 21 million light years, that puts it, on a cosmic scale, practically "in our backyard," Nugent said.

By comparison, most supernova found with the 48-inch Palomar telescope are about 1 billion light years away and far too faint for the general public to see, Nugent said.

Initially detected on August 24, the PTF 11kly has literally grown brighter by the minute and was already 20 times more luminous in just one day.

It is expected to reach its peak sometime between September 9 and 12, when it will become visible to stargazers using a good pair of binoculars or small telescope.

It will appear, blueish-white, just above and to the left of the last two stars in the Big Dipper handle.

"There are billions of stars in a galaxy. This supernova will outshine them all this weekend," Nugent told Reuters.

Supernovae of this type, classified as a "Type 1a" event, occur when a super-dense white dwarf star, about the size of Earth but containing somewhat more mass than our own sun, explodes like a gargantuan thermonuclear bomb.

The blast hurls matter in all directions at nearly one-tenth the speed of light -- matter that ultimately will form the building blocks of other stars and planets.

Such events, accounting for about one in five of all supernovae, are also used by scientists in measuring the expansion of the universe.

Similar supernovae are known to have occurred in the Pinwheel Galaxy at least three times before -- in 1909, 1951 and 1970. But instruments available to observe this one are far more sophisticated, and its early detection is giving scientists an unprecedented glimpse of such phenomena.

For astronomers, the royal straight flush of supernovae are those occurring in our own galaxy, which last happened in 1572 and was visible with the naked eye for months, Nugent said.

Records from antiquity indicate that an even more spectacular supernova in the Milky Way lit up the sky in 1006 A.D., Nugent said.