A researcher with the University of British Columbia's Sea Around Us Project conducted more than 150 interviews with Turkish fishermen from May through July to determine how Turkey's fisheries have changed. 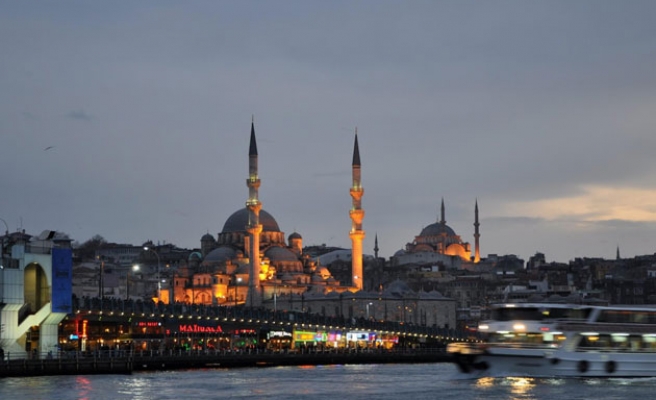 "Balik ekmek! Balik ekmek!" (Fish bread! Fish bread!) yell the vendors tucked under Istanbul's Galata Bridge, dishing out fish sandwiches to hordes of hungry locals and tourists much as they have for decades.

But frozen mackerel from Norway or imports from Morocco are more likely to fill the onion, lettuce and pickle stuffed buns than a fresh catch from the Bosphorus or Marmara Sea.

Once rich fishing grounds in seas and waterways the size of New Zealand, Turkish fish production is in sharp decline, a victim of commercial ambitions and lax regulation.

Over fishing, illegal netting and pollution threaten the industry. Anchovy production, which accounts for around two-thirds of the annual catch, fell by 28 percent in 2012, according to the Turkish Statistical Institute.

In a bid to replenish stocks, the government has banned fishing in the summer months when fish reproduce and says it is tightening supervision. But it appears too little, too late.

"Twenty years ago, you put your arm in the water you could pull out fish - there were so many," said Osman Korkmaz, a 53-year-old fisherman who has fished the Bosphorus Strait and Marmara Sea for 40 years.

Aylin Ulman, a researcher with the University of British Columbia's Sea Around Us Project, conducted more than 150 interviews with Turkish fishermen from May through July to determine how Turkey's fisheries have changed.

The number of commercial species in Turkey's fishing areas has fallen to just five or six from more than 30 in the 1960s, she said, based on her survey and catch data Turkey provided to the United Nations from 1967 to 2010.

A combination of more people, too many boats with advanced technology, weak fishing laws with even weaker enforcement and unreliable data on fish stocks - fishermen under-reporting their catch to avoid taxation and fines - were to blame, she said.

Istanbul alone has grown from one million people in 1950 to approximately 17 million today. And in lock step, the number of fishing boats has ballooned, fuelled by government subsidies from the 1970s and 80s aimed at growing the young, unsophisticated industry into a fishing fleet competitive with its Mediterranean neighbours.

"We have three generators, two winches," said Temel Sengun, 27, a commercial bonito, anchovy, and bluefish fishermen from Sariyer at the Bosphorus' northern mouth, showing off sonar and electronic equipment worth hundreds of thousands of dollars.

"Our sonar can detect schools of fish 10 kilometers in distance and there's no depth limit."

But such technology alone is not enough to guarantee a livelihood in waters with too many fishermen and too few fish.

"My family brought twin trawl boats, but now we think it was a bad idea. There are too many trawlers and purse seiners and no control," Sengun said.

"My grandfather and father built that house on the hills with their fishing income ... but I do not have the opportunity to build a house with my earnings, we work five times more and the fish is worth much less."

A lack of quota system, scant punishment for illegal fishing and falling prices all encouraged fishermen to break the rules, he said.

A senior agriculture ministry official acknowledged that poaching posed a challenge but said 65,000 inspections were carried out last year and regulations had been tightened to try to relieve the pressure on stocks and help legal fishermen.

"One of the main objectives is increasing the presence of fish in Turkey's seas," the official said, adding studies were underway into introducing new species into its waters.

He estimated Turkey's fish exports reached $475 million in the first 11 months of last year, the latest data available, mainly to the Netherlands, Germany, Italy, Japan and Britain, and up from $413 million a year earlier.

The issue has caught the attention of one of Europe's largest food wholesalers. German retailer MetroAG is sponsoring research by the Turkish Marine Research Foundation (TUDAV) for a second year to check on one of its most valuable products - and one of Turkey's most popular fish - the bonito.

A silver-bellied fish with a striped back, part of the tuna family, bonito are believed to migrate between theBlack Sea and Marmara Sea. Their fate is being closely watched by Metro's Turkish Cash and Carry business, the country's largest fish wholesaler, which sells over 6,000 tonnes of local fish a year.

Their main threats are overfishing, pollution, habitat loss due to shipping and climate change, according to TUDAV's president Bayram Ozturk.

"If you visit the fishermen this morning, you can see 100 fish, but 200 jellyfish. They spend extra money and labour taking out the jellyfish. Twenty years ago, there were no jellyfish. It means the ecosystem has gone bad. Jellyfish have no predators," he said.

The aim of the study, which will see 4,500 bonitos tagged and released over three years, is to determine where the fish are migrating and estimate stock size. Without such evidence, the government is unlikely to toughen regulations or enforcement and fish stocks will continue to fall, Ozturk said.

Metro is not alone. Campaigners Slow Food Istanbul and Greenpeace have joined forces to push for the protection of the iconic bluefish, an increasingly rare favourite of the city's top seafood restaurants, lamented for its diminishing numbers.

In an effort to shrink the national fleet of more than 20,000 fishing vessels, the government has started a programme to buy back boats from fishermen, but it has yet to gain much traction. By November, only 359 boats had been bought back.

Standing on his boat mending his nets by hand, veteran fisherman Korkmaz sees the problem in more simple terms.

"People take too much out, they don't listen," he said.