Ten workers were killed after an elevator dropped down from the 32nd floor to the ground in at a construction site in Istanbul’s Mecidiyekoy district. PM Davutoglu says he will bring up work safety issues at cabinet meeting 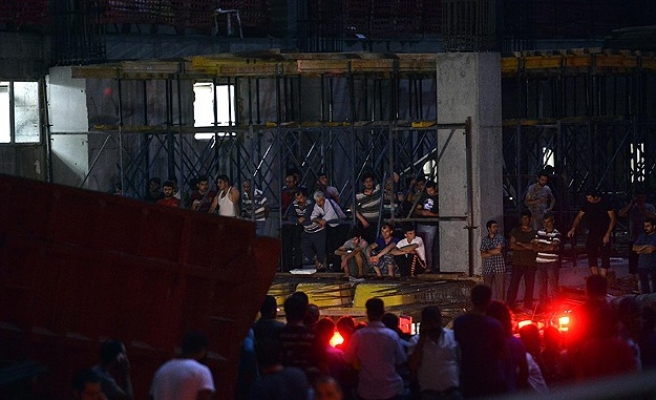 An elevator dropped down the shaft and crashed into the ground at a construction site in Istanbul's central Mecidiyekoy neighbourhood, killing 10 workers Saturday evening.

"Ten workers have been confirmed killed in the crash," said Istanbul Governor Huseyin Avni Mutlu after the accident.

The exact cause of the accident was yet to be known.

He said eight people have been detained in relation with the incident. "An investigation is underway, and the number of those in custody might increase."

The cause of the elevator accident will be thoroughly investigated, Turkish Prime Minister Ahmet Davutoglu said Sunday.

"I want to assure you that we will investigate this incident thoroughly and will take all measures to prevent such accidents in the future," he told reporters in his home city of Konya.

"We will discuss this issue in detail at Monday's Council of Ministers meeting. We will receive a briefing from the Work and Social Security Minister Faruk Celik who has been on site all night and who has updated me until this morning. We will also throw light on the matter and discuss work safety issues," Davutoglu said.

Davutoglu also said discussions will take place on the shortcomings of the latest work safety law which was passed in parliament in June.

He also sent his condolences to the families of those who lost their relatives in the accident.

Aziz Torun, director general of the Torunlar Real Estate Investment Company that runs the construction site of for a 42-storey housing block, dismissed claims that workers are made to work without employment insurance, adding the company has always checked safety on-site and their employee's health.

According to International Labor Organization (ILO) figures, Turkey ranks first in Europe and third in the world for fatal work accidents. The ILO says 18 out of 100,000 insured laborers die every year in work accidents, seven times greater than the EU average of 2.5.