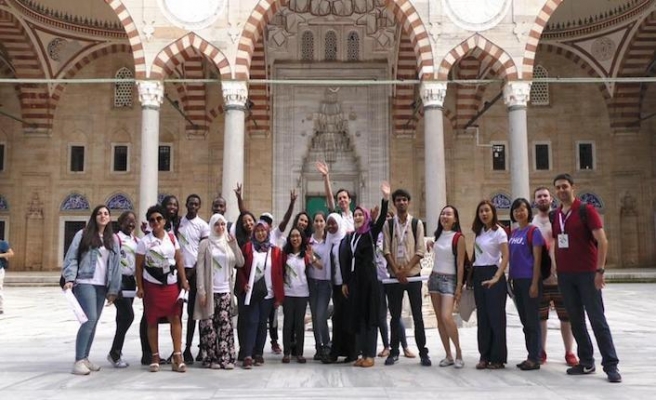 Students from a total of 118 countries finished a program organized by the Yunus Emre Institute (YEE) which taught them Turkey’s culture, art and language.

A total of 1,000 students participated in the one-month-long program which was held across Turkey.

Ates said that around 5,000 students have come to Turkey within the scope of a total of nine programs so far.

"We aim to teach Turkish language to groups from different nationalities and professions,” he said.

“The young people got to know our country closely and discovered its richness. This is very important for the promotion of Turkey,” he added.

Ates said that the unique experience of the students including the language, culture, food, art and history will make them voluntary ambassadors of Turkey.

In southeastern Gaziantep, the foreign students also visited a Baklava Museum and learned how to make the famous Turkish dessert.

Since its establishment in 2009, the Yunus Emre Institute has taught Turkish to more than 99,000 people in 45 countries.

Named after the influential poet Yunus Emre, the institute now has nearly 50 cultural centers around the world offering artistic, social and scientific programs.