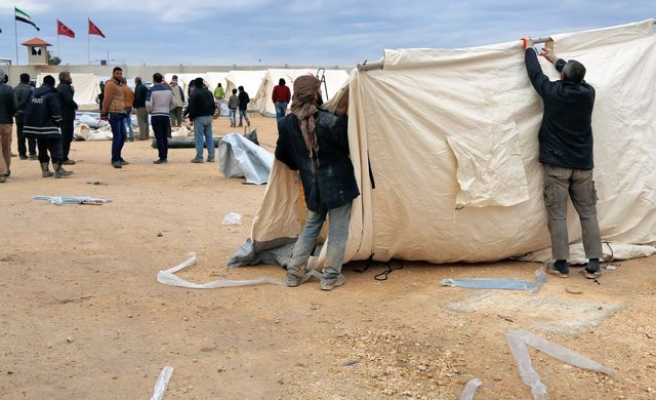 Turkish Deputy Prime Minister Numan Kurtulmus said Monday there was a possibility that 600,000 refugees would soon arrive at the Turkish border.

“It is estimated that a wave of 600,000 refugees may come to the Turkish border soon in a worst case scenario,” he said. “Our first goal is to host these refugees outside of Turkey.”

The deputy prime minister said that Turkey was always on alert and cautious regarding the possibility of attacks that target its sovereignty and had carried out all required preparations.

“Every single development in Syria concerns Turkey,” he added. “We have a border of 911 km. Some people that come from 10,000 km, 4,000 km or 6,000 km away have a close interest in Syria. Moreover, they actively take part in the conflict in Syria. Furthermore, they participate, through proxies, to the crumbling of Syria.”

An attack by Russia and the Syrian regime in northwestern Syria has seen supply routes from Turkey to rebel-controlled areas cut, leaving towns and villages without vital aid.

Earlier Monday, the Turkish Prime Minister Ahmet Davutoglu said Germany and Turkey had taken in most refugees from the Syrian crisis, with Turkey now hosting more than 2.5 million Syrians. Germany took in 1.1 million refugees last year, the most of any EU nation.