The summit is expected to evaluate and endorse the "Joint Implementation Plan of Africa-Turkey Partnership 2015-2018," featuring key areas of cooperation. 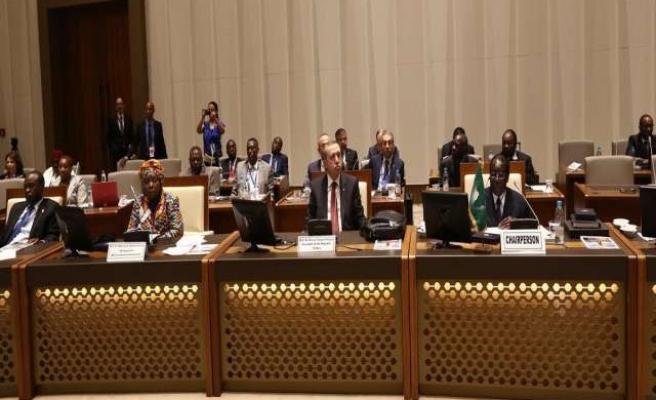 Leaders of African countries and Turkey met on Friday in the seaside city of Malabo, the capital of Equatorial Guinea, to review the performance of the 1st Africa-Turkey partnership and to endorse projects and implementation modalities on priority areas for the coming five years.

The 1st Africa-Turkey Partnership was held in August 2008 in Istanbul, Turkey.

The summit is expected to evaluate and endorse the "Joint Implementation Plan of Africa-Turkey Partnership 2015-2018," featuring key areas of cooperation.

It will also look into and endorse a "Matrix of Key Priority Projects of the Africa-Turkey Partnership 2015-2018" with the aim of discussing the way forward on proposed key priority projects.

Some 200 business leaders, along with a delegation led by Erdogan are attending the three-day summit in addition to a handful of African leaders.

Mauritania and Ethiopia – the AU's outgoing chair – are both attending this year's summit, along with Algeria, Nigeria, South Africa, Senegal, Libya, Zimbabwe, Kenya, Ghana, Chad, the Democratic Republic of Congo and Egypt.

Thirty-two other African countries are attending the event as observers.

"A lot has happened since the 1st summit in August," Dlamini-Zuma said, mentioning China’s outpacing of Japan as the world’s second economy and the global financial crisis.

She said Africa cherishes its partnership with Turkey particularly its cooperation in the areas of human resources development, agriculture and agribusiness, trade and investment as well as in education and health.

Infrastructure development, such as railway and highway inter-country links as well as information and communication technology, she said, were also among the priority areas of partnership.

“May be,” she said, “Turkey can help Africa silence the guns,” referring to a commitment by the African heads of state and government to silence the guns in Africa by 2020.

Meanwhile, Dlamini-Zuma said, many of Turkey–Africa summit plans and objectives mapped out five years ago in Istanbul have yet to materialize.

"This summit should review progress and [show] how to overcome challenges," she said.

The summit is expected to issue a declaration showing the second 5-year roadmap of the Africa-Turkey partnership.

Obiang, president of Equatorial Guinea, said that the summit initiated "negotiations of 2nd Summit Partnership ...towards development and sustainable integration."

He said Equatorial Guinea was ever committed to do what it could to see a successful partnership between Africa and Turkey.

The Mauritanian President, for his part, called on President Erdogan to make use of his popularly-mandated presidency "...to ensure that Africa - Turkey partnership go from strength to strength."

A summit that focused on a proposed roadmap for cooperation between Africa and Turkey from 2015 to 2018 has wrapped up in Malabo.

Speaking to The Anadolu Agency at the end of the summit, Kenyan Foreign Minister Amina Mohamed hailed the meetings as "very concise, very strategic and very direct."

Mohamed praised the idea of holding periodic meetings, saying this would help keep track of the progress of projects agreed upon by the two sides.

"We can take stock of the projects… see which ones are performing well, which are not," she said.

"We have agreed on the matrix and plan of action," she said. "But I think we still need to reduce the number of projects and then focus the resources into those projects that we can have success."

The minister, however, did not specify what the projects were, saying merely that they were in the areas of transport, information technology, health, education and agriculture.