As 13 Turkish researchers are to soon travel to Antarctica, the first scientist from Turkey to set foot on the frozen continent recalls the unique experience 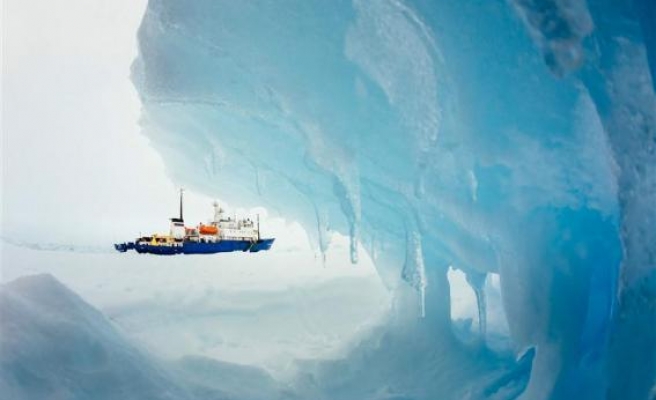 “It is a continent, where beauties of white fascinate people, where you never want to be alone.”

Polat, who is the head of the Seismology Department of Geophysical Engineering at Izmir Dokuz Eylul University, was the first scientist from Turkey to set foot in Antarctica, on December 4th 2013.

A year later, another expedition, this time with 13 Turkish scientists is scheduled for the end of the year and is to last for about a month.

Antarctica serves as a scientific preserve since the Antarctica Treaty was signed in Washington in 1959, of which Turkey is a party.

A provision of the agreement says the continent shall only be used for “peaceful purposes and shall not become the scene or object of international discord.”

Associate professor Polat, along with nine researchers – one Mongolian and eight Bulgarians -- flew to the region from Argentina in a military plane.

His quarters were located in a station belonging to Bulgaria, which has been operational since 1988. A total of 31 countries have scientific outposts in Antarctica. Turkey does not.

Polat stayed for more than 30 days in the freezing and unforgiving climate.

He established a temporary earthquake station to measure seismic activity. He took the opportunity to bring soil, seaweed and water samples back to Turkey for further research.

Polat cannot stress enough the importance of scientific research on the uninhabited continent.

“There are many untouched places, which are suitable for scientific studies. Everything is crystal clear as there is no pollution there,” he says.

“It is also the most sterilized place in the world. It is like an operating room,” he adds. “You cannot catch cold there. Your nose cannot run. You don’t feel any weakness. Microbes cannot breed…”

Professor Sakir Sahin at Geology Engineering Department at Suleyman Demirel University in the western Turkish city of Isparta, is one of the 13 Turkish scientists scheduled to travel to Antarctica.

He is looking forward to the trip.

“It will be a broad-participation expedition, which will pave the way for next researches,” he said. “We will gather both seismological and geological data during our stay in order to contribute in finding a best place to build a station there.”

Polat also speaks of importance of opening a station there.

“For the country’s national interests and its scientific development, we should have a station there as soon as possible,” he says.

According to the UN world population statistics, Antarctica has no permanent residents but around 1,000 to 4,500 scientific personnel reside there at any given time.

Antarctica is considered to be the coldest continent on the earth. The lowest temperature was recorded in 1983 at -89° C. In the summer, the temperatures rise to -15° or -5° C.

Polat warns about the cold especially. It is not easy to simply survive there, he says.

“The weather varies constantly. When the sun shines, snowstorms can start suddenly. As you don’t know what you will encounter, it can sometimes be frightening,” he adds.

“It is the last place, where people want to be alone. As there are no modern communication tools, you need people there,” Polat says.

“So, it is really a continent of peace, where titles and political backgrounds of people are not important.”

The scientist is not immune to the continent’s breathtaking beauty.

“I cannot forget the shades of white there. (…), it is a very romantic place,” he says, laughing.

Perhaps Antarctica isn’t so cold after all…