Athletes and Istanbulites race in the city marathon 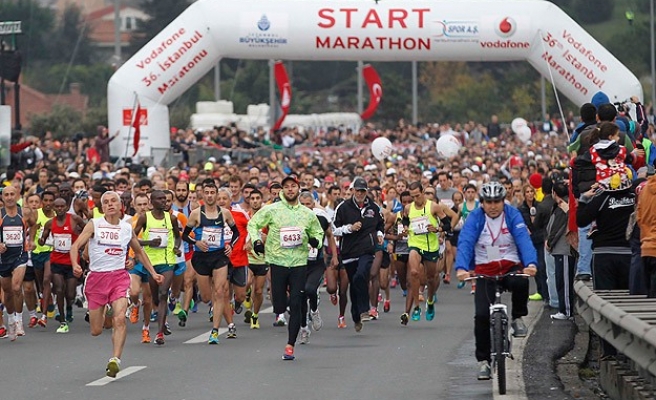 Ethiopian Amane Gobena in the women's category and Moroccan Hafid Chani in the men's category have finished first in the Istanbul marathon on Sunday.

Tens of thousands of Istanbulites and athletes from around the world participated in the world's only intercontinental marathon on Sunday morning, which crosses the Bosphorus Strait from the Asian to the European side.

Nearly 25,000 athletes, including Olympic medal-winners, are taking part in the 36th 42-km Vodafone Istanbul Marathon, as well as in two other 15-km and 10-km races.

The marathon started at the Asian edge of the Bosphorus Bridge and ended in the historical peninsula of the Sultanahmet district, where the Blue Mosque and Hagia Sophia are located.

Istanbul mayor, Kadir Topbas, was at the start of the marathon. He was joined by Akif Cagatay Kilic, the youth and sports minister, and former Kenyan marathon world record-holder Paul Tergat.

Close to $1 million will be awarded among the top athletes from 118 countries.

In 2013, French athlete Abraham Kiprotich has secured the first place, while Siraj Gena from Ethiopia and Evans Kiplagat from Kenya followed him respectively.

Also, up to 150,000 Istanbulites from all ages, occupations and neighborhoods, left their warm houses to go for an 8-km public fun run, creating an open-air festival in a chilly weather.