Bears in the eastern province of Kars’ Sarıkamışforests have their favorite trees to scratch their itches on, motion-triggered cameras installed by the KuzeyDoğa Association have revealed. 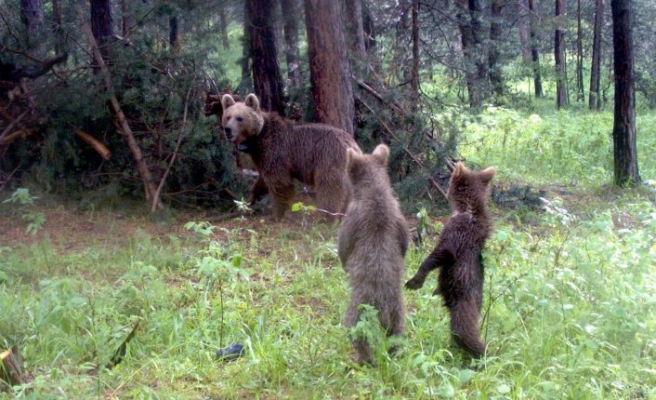 The bears have used only three trees to rub themselves against in the forest, an association official, Emrah Çoban, said, adding that they have been recording wildlife in Sarıkamış since 2008 with these motion-triggered cameras.

He said they follow the animals’ behaviors closely, adding: “The motion-triggered cameras are actually our eyes in nature. They give us the chance to examine what we can’t see. This way, we obtain information about the animals’ behaviors. Thanks to the satellite transmitters and cameras, we obtained a lot of detailed information about brown bears over the last 10 years.”

He said the association had captured very interesting images of the bears in the forest.

“As we examined the Sarıkamış forest, we saw that the brown bears discovered some trees and started using them to rub themselves against. They randomly choose certain trees to rub against, but some time later, all the other brown bears used these [three] trees to scratch their itches on,” he said.

Çoban said they also learned about the hierarchical structure of the brown bears with the help of the cameras, adding, “We found three trees to scratch against in the Sarıkamış forests. They are used by pigs, wolves and especially brown bears to meet their itching urges. Just like wolves, the brown bears use the trees to mark their territory.”

Çoban also said the population of brown bears in Turkey will be revealed as the work in Sarıkamış’s forests has started becoming widespread.