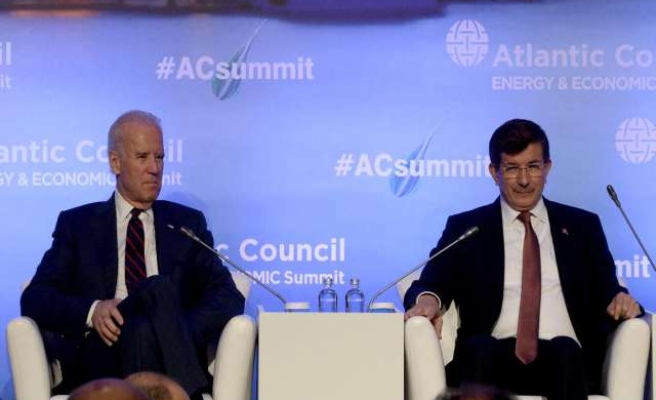 Davutoglu made the remarks in a speech at the closing session of the sixth Atlantic Council Energy and Economic Summit in Istanbul.

Turkey is set to take over the 2015 term-presidency of the G20 group in December.

"When we start our G20 presidency, we plan to take steps in energy security, which is indeed a guarantee for stability. We want to be a bridge of peace... Energy should not be seen as a weapon for conflicts, it should be seen as a facilitator to further improve the well-being of people," he said.

He added that energy was essential for all countries.

"Around half of humanity does not have access to power. When we start our G20 presidency, we will take steps to improve the situation for all humanity," he said.

"If the issue is environment, then foreign ministers from every country should act as interior ministers of humanity," he added.

The prime minister also spoke about the disputed oil-and-gas reserves around Cyprus.

Davutoglu said Turkey would be the primary user of gas coming out of Cyprus.

"Everyone will gain in Cyprus if both sides accept that natural sources around the island belong to all sides. Peace should be achieved without delay," he said.

He called for restarting negotiations over the issue. "Let's use this opportunity for the solution of this issue," he said.

The prime minister also referred to the Baku-Tbilisi-Ceyhan oil pipeline spanning the Caspian and the Mediterranean. He called on Armenia to remain peaceful when Caspian oil gets transferred to Europe.

"Energy is a great value for us; it should be used for the prosperity of humanity. When it is used as a tool for conflict, there will be no winners in the long term," Davutoglu said.

The premier also highlighted the importance of U.S. and Turkey relationship, especially in the current backdrop of regional turmoil. He said cooperation between both sides had become even more vital because of the recent Arab Spring and the geopolitical crises that resulted in its aftermath.

"The cooperation between the two countries is needed even more in these days," Davutoglu said. "Especially for energy and economy, we know that crises are becoming intense in our region," he added.

He said the geopolitical issues leave an impact on Turkey.

"All the crises in Turkey’s neighboring countries have made an impact on our country," he said. "We are not willing to see regimes torturing their nations and terrorist organizations threatening peoples’ lives and safety."

About Iraq, Davutoglu said Turkey wanted to see an inclusive political structure in the country.

"Iraq should not be a victim of terror; Iraq should be talked about its wealth ... We want to continue the dialogue with Iraq. Turkey needs energy supply, and we cannot just sit back and watch what is happening there," he said.

"Iraq can become the fastest-growing country in the world if stability is achieved. It is the luckiest country in the Middle East in terms of its rich natural sources and big population," the premier added.

About Iran and Ukraine, Davutoglu said "these are two countries which are encountering serious regional problems."

The prime minister also praised the summit. "I am sure the Atlantic Council Summit is contributing in resolution of turbulence in the war-torn regions," he said.

The Atlantic Council Energy and Economic Summit began on Nov. 19. It hosted discussions on a variety of topics, including energy security, global energy outlook, demand and supply, oil and natural gas, energy finance and investments, and renewable energy sources.