Turkey embraced the million Syrian refugees on its territory with the same fervor it has for the Palestinians of Gaza, says Turkish Prime Minister. 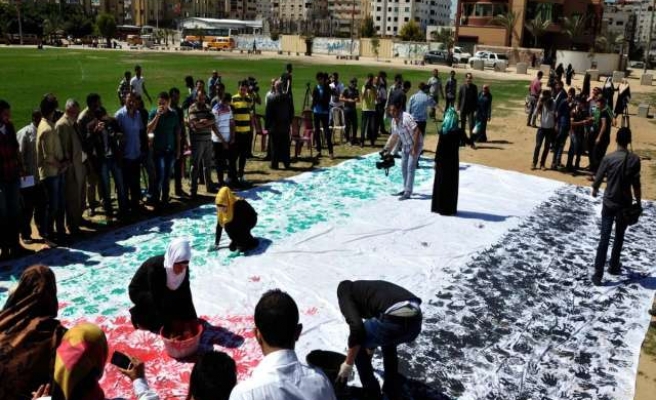 Turkey embraced the million plus Syrian refugees on its territory with the same love and fervor it has for the Palestinians of Gaza, Prime Minister Ahmet Davutoglu said late Thursday night.

He made the remarks at an event titled "Living Gaza," which was organized by the Ankara-based Yunus Emre Institute.

Davutoglu said the struggle of the Palestinian people represented the aspirations of every oppressed individual in the world.

He said that when Turkey opened its border crossing and “embraced” over one million Syrian refugees, it did so with the same fervor.

Turkey "saw the people of Gaza and Hiroshima, and all those who died of hunger in Somali, when our Syrian brothers came at our door," he said.

He said that when Palestinians fight for their noble cause, they do so as if they are also fighting for the suppressed people of Myanmar’s Arakan State, Damascus, Baghdad and Somali.

The premier also recalled Turkish poet Cahit Koytak’s poem "Gazan Yousuf," which he said represented not only the Gaza Strip, but also symbolized every place and person stricken suffering from an atrocity.

Davutoglu said that when he visited the Gaza Strip in 2012, he met the father of a girl named Yousa, who was martyred in an Israeli airstrike.

"His tears were not only those of a father shed for his girl, but tears of all of humanity," he said.

When he was the foreign minister, the prime minister said he had also mentioned this girl’s name in his speech at the United Nations Security Council and was the only one who had called for the recognition of Palestine as a sovereign state.

Davutoglu also spoke about his experience at Gaza's Shifa Hospital, where he and his wife were welcomed with Turkish flags late night as Israel carried out bombardments in the area.

"After visiting the hospital, we were in tears and felt ashamed in the name of all humanity,” he said.

He also recalled a Palestinian man approaching him that night, who held his hand and said: “I saw you in Arakan the other day, hugging the suppressed Rohingya Muslims there. Please do not leave them alone."

Davutoglu said he was amazed that despite their own terrible hardships, the Palestinian felt a pain in his heart for other oppressed people around the world.

An exhibition was also arranged at the “Living Gaza” event, where Anadolu Agency's photographs from the recent conflict in Gaza were also showcased.

‘Gaza from Anadolu Agency's Perspective’ exhibition included 31 photographs, which reflected the tragedy of Gaza and its people through the direct experiences of AA reporters and correspondents in the field.

More than 2,150 Palestinians, mostly civilians, were killed during an Israeli operation in the Gaza Strip between July and August that also destroyed thousands of homes.