Turkey does not need any country’s involvement in its efforts to make peace with Kurdish rebels, says Yalcin Akdogan. 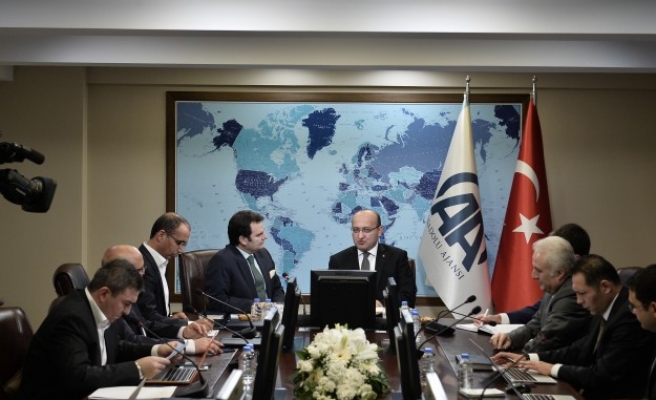 Everyone now knows Turkey does not help terrorists because it allowed foreign fighters to enter Syrian town of Kobani to fight the ISIL, Turkey's Deputy Prime Minister said Monday.

Yalcin Akdogan clarified doubts about Turkey’s policy about the ISIL and other vital issues in an exclusive interview with The Anadolu Agency's Editors' Desk at its headquarters in Ankara.

"Since Turkey allowed foreign fighters to cross its borders in fighting against ISIL in Kobani, everyone realizes it does not help terrorist group ISIL in any way," Akdogan said.

Turkey had recently allowed the Iraqi Kurdish Peshmerga forces safe passage through its borders to reach the Syria's battle-torn town Kobani. The Kurdish-populated town has been under a relentless attack by the terrorist group since mid-September.

He said Turkey’s attitude towards the group was now clear to the world, especially since the country had also declared the ISIL a terrorist organization.

Akdogan also accused a Turkey-based Kurdish rebel group of cashing in on the situation in Kobani to create chaos in the country.

Referring to the PKK, Akdogan said the organization used the fighting in Kobani to revive violence and pressure, without which it fears it will lose the support of people.

The deputy prime minister also called for the toppling of the Assad regime in Syria. "There is no logic in solving the Syria issue without toppling the regime, which lost its credibility by torturing its people and using chemical weapons," he said.

Akdogan’s remarks come after CNN reported Thursday that Obama was calling for a review on the U.S.’s Syria policy after realizing that the ISIL could not be defeated unless Syrian President Bashar al-Assad was toppled.

The deputy prime minister also spoke at length about the government’s solution process with Kurdish rebels.

He said that while Turkey would continue its efforts to make peace, it did not need any country’s interference to make peace with the rebels.

The Turkish government’s solution process launched early last year aims to secure an end to the decades-long conflict with the outlawed terrorist Kurdistan Workers' Party, or the PKK, which has claimed the lives of more than 40,000 people.

“We don’t need any third country, system or mechanism included in the process,” he said.

Akdogan is expected to meet a delegation of the pro-Kurdish Peoples' Democratic Party, or the HDP, at the Prime Ministerial Office Monday.

"The meeting with the HDP is substantial," he said.

The deputy prime minister said dialogue was the basis of the solution process.

He said the dialogue with pro-Kurdish party aims to stop all protest actions, including blocking of roads and setting vehicles on fire.

"We have to continue this process by protecting our citizens in the region without compromising on public safety and security," he said.

The government blamed the pro-Kurdish HDP party for inciting violence in last month's deadly protests, which in turn led to an interruption in the solution process.

The demonstrations came after the pro-Kurdish party issued a call, via social media, inviting its sympathizers to take to the streets as a sign of solidarity with Syria's besieged Kurdish populated town of Kobani.

The call was followed by a week of violence that left at least 38 civilians and two police officers dead, along with scores of damaged vehicles, state buildings, political party offices and shops in Turkey.