Jamal Khashoggi has been missing since he entered Saudi Consulate in Istanbul on Oct. 2 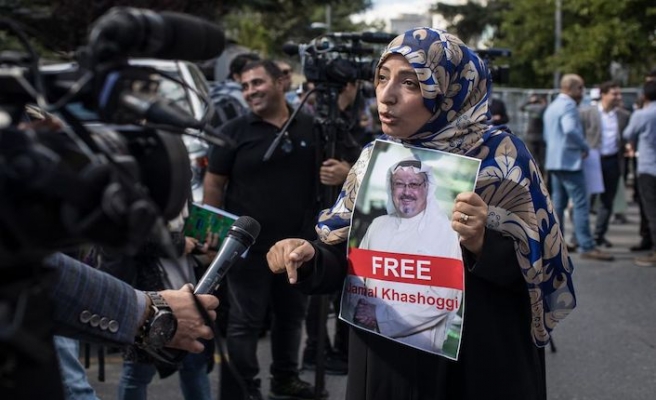 The mystery of the disappearance of the Washington Post correspondent Jamal Khashoggi has yet to be solved.

Khashoggi, a columnist for the Washington Post newspaper, has been missing since he entered the consulate Oct. 2.
Saudi Arabian authorities have yet to give a clear explanation on the fate of the missing journalist while several countries particularly Turkey, the U.S. and the U.K. have expressed their desire that the matter to be elucidated as soon as possible.

According to his fiancee Hatice Cengiz, Khashoggi first arrived at the Saudi Consulate in Istanbul on Sept. 28. Since he was told that his documents would be ready in a week, Khashoggi went to London and returned to Istanbul on Oct. 1.

Before Khashoggi entered in the building, he told his fiancee to call Yasin Aktay, an advisor to President Recep Tayyip Erdogan, and the Turkish-Arab Media Association should he not emerge from the consulate in two hours.

It was 1.14 p.m. (1014GMT) when Khashoggi entered the Saudi Consulate in Istanbul. At 4.00 p.m. (1300GMT), he still had not emerged from the building. Then, his fiancée Hatice Cengiz called Yasin Aktay as well as the Turkish-Arab Media Association.

At 6.00 p.m. (1500GMT), an officer in the Saudi Consulate told Cengiz that Khashoggi "had already left the building, so there is no need to wait here".

The Kingdom of Saudi Arabia issued a statement on Twitter on Oct. 4. In their statement, the Saudis claimed that Khashoggi disappeared after he left the consulate building.

The Chief Public Prosecutor’s Office in Istanbul launched a formal investigation into the disappearance of Khashoggi.

The Turkish police department said hours later that Khashoggi had not left the building since he entered on Oct. 2.

On the same day, 15 Saudis, including several officials, arrived in Istanbul on two planes and visited the consulate while Khashoggi was also inside, police sources said.

These Saudis have since all left Turkey.

CCTV footage of Khashoggi's entrance in the consulate building and suspicious comings and goings that same day and that of unusual traffic at Ataturk Airport were also revealed.

On Oct, 7, the Consulate of Saudi Arabia denied the claims, focusing namely on a Reuters report on its Twitter account.

The officials from the Consulate of Saudi Arabia invited Reuters correspondents to the consulate building to prove that Khashoggi was not inside.

Saudi Ambassador Walid Bin Abdul Karim el-Khereiji was summoned by Turkey’s Foreign Ministry on Oct. 4 and Oct. 7. and "a full cooperation on the incident" was requested.

The Turkish Foreign Ministry on Tuesday said an examination inside the premises of the Saudi consulate would be conducted.