If you erase your civilization, you will see others advancing ahead of you in technological innovation, President Erdogan says 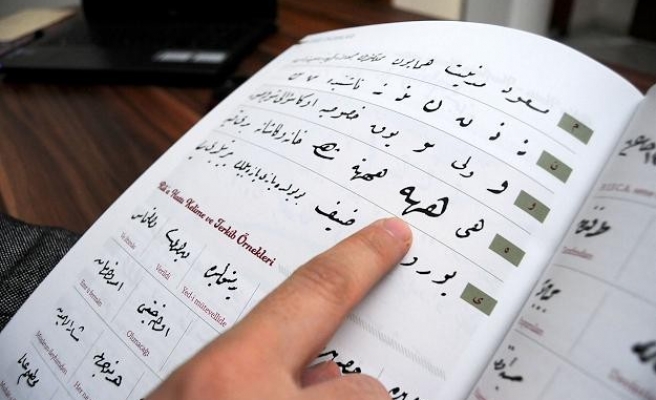 Learning the Ottoman-era language is a must for the next generation to repair our damaged ties with our ancestors' civilization, Turkish President Recep Tayyip Erdogan said on Friday.

In an address at a reception made in honor of Turkish calligraphist Hasan Celebi, Erdogan slammed the opposition's criticisms on a new bill which proposes to make the Ottoman language an obligatory course in high schools.

"Is there any other nation who cannot read the language its own civilization is based on?" Erdogan asked.

"The current number of those having a command of the Ottoman language is not enough for us. No one should have concerns about teaching and learning Ottoman-era Turkish," he said.

"Reviving Ottoman-era Turkish is not an ideological issue, as the opposition claims, but rather a theme to which the whole Turkish nation should rally," Erdogan said.

"They say we are discussing Ottoman while the others are researching space. But if you erase your civilization, you will see others advancing ahead of you, going into space, etc.," Erdogan said.

The Turkish President also spoke about the "artificial borders" created, and the "new territories to be colonized" by the West following World War I.

"Not one of these historic processes did as much damage as the processes that affected language and culture," the president said.

"Despite all those attacks in the past, Arabic, Ottoman, Kurdish and Turkish are still alive. The damage to our language will be healed by the next generation," he added.

The suggestion for obligatory Ottoman studies in high schools was made at the 19th Council of Turkey's National Education on Dec.5.

The Turkish people have used a number of different alphabets throughout history, including the Arabic alphabet after they accepted Islam.

Later on, Ottoman intellectuals of the last period, including Abdul Hamid II, the 34th sultan of the Ottoman Empire, suggested that Arabic letters should be improved to make reading and writing easier.

The use of the new alphabet was made compulsory in all public communication.

Replacing the Arabic script was defended on the grounds that it was not appropriate for the authentic Turkish phonology, but some say the change caused Turks to be cut off from the literary heritage of the Ottoman era.