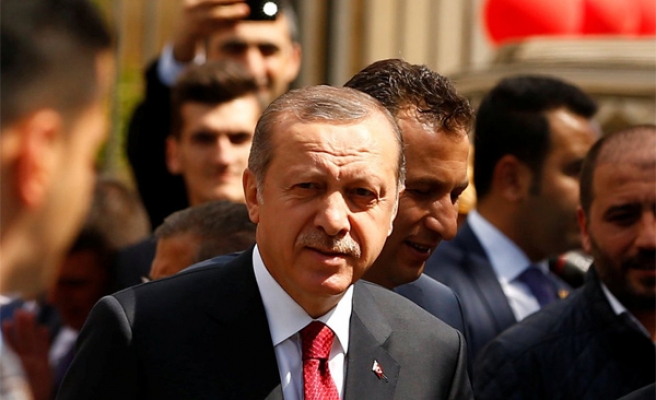 Speaking at a joint news conference with his Iranian counterpart Hassan Rouhani in capital Tehran, Erdogan said: “What is the referendum organized by northern Iraq’s regional administration for? No country in the world apart from Israel recognizes it.

“A decision made at the table with Mossad is not legitimate, it is illegitimate.”

On Sept. 25, Iraqis in Kurdish Regional Government (KRG)-held areas -- and in several areas disputed between Baghdad and Erbil -- voted on whether to declare independence from Iraq.

The illegitimate referendum continues to face sharp opposition from most regional and international actors, many of whom warn that the poll would distract from Iraq’s ongoing fight against terrorism and further destabilize the already-volatile region.

The Turkish president said Iraq was the primary topic of discussion during his meeting with Rouhani.

“We have stated that Turkey does not recognize the northern Iraq regional administration's illegitimate referendum.

“I believe that northern Iraq’s local administration will be condemned to isolation by siding with a certain figure on one end and another figure on the other, and then taking action with those certain figures.”

He reiterated Turkey’s position that it would continue to engage with the central government in Baghdad.

“Turkey and Iran's determination on the matter is evident. Turkey will only engage with the central government in Iraq and we certainly term this referendum as illegitimate,” he said.

“As you know, there are steps we, both Turkey and Iran, have taken on the matter. But there are more severe steps we will take in the upcoming period.”

Rouhani saw the poll in northern Iraq as an attempt by “some foreigners” to create sectarian and ethnic strife.

“Some foreigners plan to split the area to increase ethnic and sectarian discrimination. Both countries do not accept such acts of discrimination,” he said.

“Whatever name they give to it, we will fight against terrorism. The terrorists should know that we will not allow their brutal acts.”

Erdogan was given a red-carpet welcome upon his arrival in Tehran Wednesday.