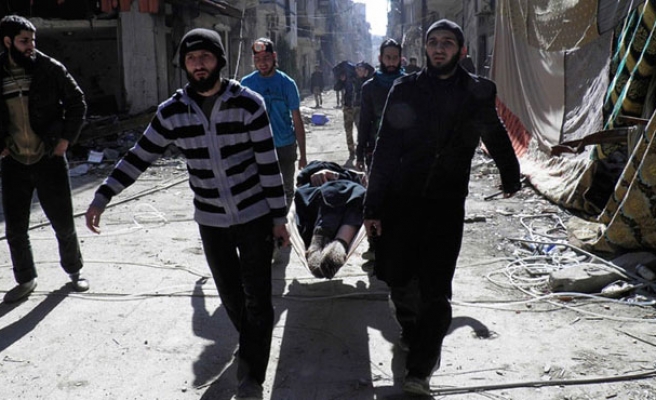 Turkish President Recep Tayyip Erdogan slammed the West for not reacting to the critical situation in Aleppo, which he says is Syria's most important city, on Saturday.

Speaking at the Latin American Muslim Leaders Religious Summit in Istanbul, Erdogan said: "There is economy, history, culture in Aleppo. There is a population of one million. Those who started an uproar for Kobani, where Islamic State of Iraq and the Levant militants and peshmerga forces are clashing, did not feel any concern on Aleppo."

"Why is Kobani so strategic for you? Erdogan said referring to Western nations. “It is on our border and it would be strategic for us. And there are no civilians. Turkey is already hosting 200,000 people fleeing from there."

"When it comes to Muslims, (...) all Western values disappear. They even discriminated between terrorist groups, between the secular and non-secular. If terrorists claim to be secular, they felt sympathy for that," Erdogan also said, blaming Western nations for not treating the Democratic Union Party, or PYD, on the same level as ISIL.

The former is an affiliate of the Kurdistan Workers’ Party, PKK, which is outlawed in Turkey.

The clashes between Islamic State of Iraq and the Levant militants and the outlawed Syrian Kurdish Democratic Union Party’s armed units in Kobani have intensified since September.

The U.S. provided military weapons to Democratic Union Party fighters in October despite the opposition from Turkey.

Meanwhile, Syria's most populous city Aleppo remains besieged, on one side by Bashar al-Assad’s forces and, on the other, by ISIL militants. The opposition Free Syrian Army controls also controls several key neighborhoods.

The participants applauded Erdogan when he said, "They prefer bringing democracy to oil-rich countries, do not care about the ones lacking it."

Erdogan also touched upon the Israeli offensive at the holy site of al-Aqsa Mosque in East Jerusalem, saying "Al-Aqsa does not only belong to Palestinians, it is one of the two directions in the world for Muslims," the other being Mecca.

Tensions have run high in East Jerusalem since late last month, as a number of Israelis forced their way into the mosque complex, drawing the ire of Muslim worshippers and official condemnation from Arab and Muslim countries.

Both Jews and Muslims consider Al-Aqsa to be a holy site.

Speaking on the Muslim heritage in Latin America, Erdogan said that while the discovery of the American continent has been attributed to the Genoese explorer Christopher Columbus, there are records that Muslim navigators had already reached the continent.

"Some 314 years before the discovery of Columbus, Muslim navigators reached the continent in 1178," Erdogan said.