President Erdogan said all may take part in solution process, but that sabotage would not be tolerated. 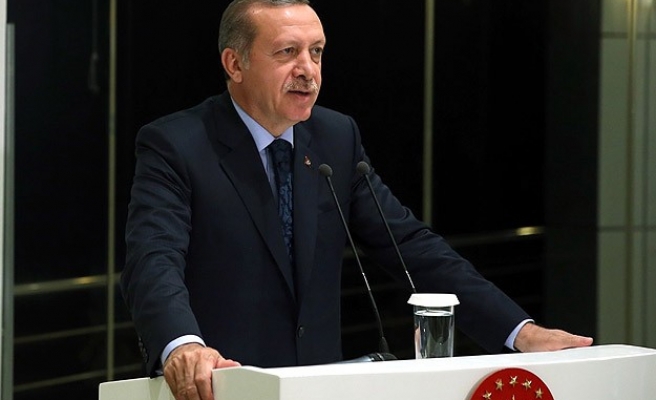 "The solution process is not a bargain or a concession process," Turkey’s President Recep Tayyip Erdogan said on Wednesday.

There are clear borders and a framework to the solution process, Erdogan said, speaking of the process which was launched last year, aiming to secure an end to the decades-long conflict with the outlawed Kurdistan Workers' Party, or PKK, which has claimed the lives of more than 40,000 people.  The process was interrupted after illegal demonstrations erupted in early October across Turkey as a sign of solidarity with Syria's besieged Kurdish populated town of Kobani.

But those who would sabotage the solution process,  would face the judgement of the state, as the Turkish nation would not tolerate such actions, Erdogan said.

“Our nation will not tolerate impudence, especially lack of order, endless inappropriateness and contradictory requests,” he said.

Turkey's president also said new judicial and security legislation would guarantee the country protection from "terrorist threats" or street demonstrations which erupt into violent events, like those that happened in October.

The new bill package is to restructure the Interior Ministry and the Turkish Police department, and to introduce measures to prevent crime, imposing penalties for possession of weapons and for incitement to violence and gives more power to law-enforcement officials, including police and prosecutors.

President Erdogan spoke at the fourth Merchants and Craftsmen Council at the Ministry of Customs and Trade, which gathers every two years in November. The meeting was held in Turkey’s capital, Ankara.

“Tradesmen and craftsmen are the ones who express the country’s nationalism and spirit,” Erdogan said.

Erdogan explained that, if these people were not part of Turkey then nothing would be left of the country’s history.

“You will not be able to find such deep-rooted traditions of merchants and craftsmen in any other country or civilization,” he said.

Erdogan stated that there was no discrimination among Turkish, Kurdish or Arab craftsmen, as all are brothers.

The PKK is considered as a terrorist organization by Turkey, EU and the U.S.A.