President Erdogan says if terror groups exit Syria, there is 'no job' left, and Turkey is against partitioning Syria 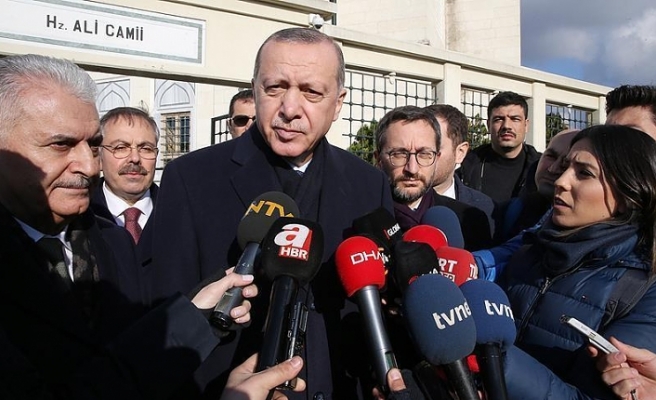 Syria's Assad regime is running a “psychological” operation, said Turkey’s president on Friday, amid reports of a deployment of regime troops to a key northern city.

"We know that Syria is in a psychological action. We know that there is a situation like waving their own [regime] flag there. But there is nothing definite there yet," Recep Tayyip Erdogan said, responding to reports of regime forces entering the northern city of Manbij in coordination with the YPG/PKK terror group.

Speaking to reporters in Istanbul after Friday prayers, Erdogan said Turkey's goal is to teach the YPG/PKK terror group a lesson, and Turkey is determined to make it happen.

"We are against the partitioning of Syria. Our goal is terrorist groups leaving there. If the [terrorist] groups leave, then there is no job left for us," he stressed.

On Nov. 1, before the announcement that U.S. forces would leave Syria, Turkish and U.S. troops began joint patrols in Manbij as part of an agreement that focuses on the withdrawal of YPG/PKK terrorists to stabilize the region.

Turkish President Recep Tayyip Erdogan has signaled that a cross-border operation against the terrorist PYD/YPG in Syria will happen soon. Since 2016, Ankara has successfully carried out two similar military operations in northern Syria.

U.S. President Donald Trump last week made the surprise announcement that the U.S. would withdraw its troops from Syria. The decision followed Trump's phone call with Erdogan in which the two leaders agreed on the need for more effective coordination over the civil war-torn country.

U.S. troops in Syria have been cooperating with the YPG/PKK to fight Daesh, against Turkey’s objections that using one terrorist group to fight another makes no sense.