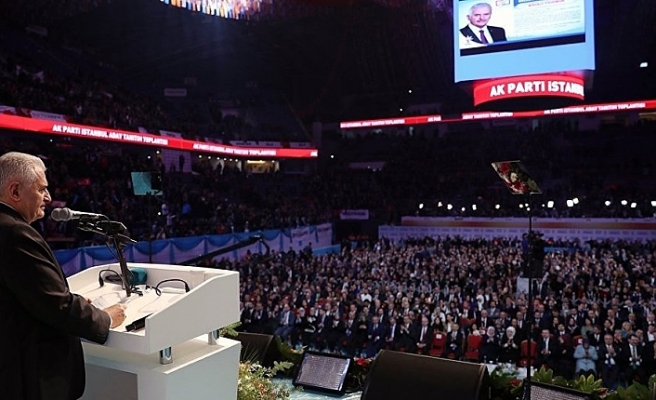 Turkey’s president on Saturday tapped a senior colleague to run for Istanbul mayor in the March 2019 local elections.

Over 15 million people -- nearly one-fifth of Turkey’s population -- lives in greater Istanbul. Local elections across Turkey are set for March 31.

Accepting the candidacy, Yildirim vowed that if elected mayor, "I will work hard to serve Istanbul."

Yildirim thanked Erdogan for his trust and confidence as well as his AK Party colleagues for their support.

After Yildirim's remarks, Erdogan wished him all success in the race.

The Turkish parliament elected Yildirim its new speaker this July.

Yildirim, 63, Turkey's last prime minister, first won a seat in parliament as a deputy for Istanbul in the fall 2002 elections, which swept the AK Party into power, and served as minister of transport and communications through 2007.

In the 2007 general elections, he was elected an AK Party deputy from the eastern Erzincan province and continued to serve as transport and communications minister.

After being elected a deputy from the Aegean province of Izmir in the 2011 general elections, Yildirim became minister of transportation, maritime, and communications.

In 2014 he ran for mayor of Izmir but came in second, with 36 percent percent of the vote.

In November 2015, then-Prime Minister Ahmet Davutoglu reappointed him to his longtime Cabinet post.

During Yildirim’s tenure as transport minister, Turkey built high-speed rail lines between the capital Ankara and the central Anatolian cities of Eskisehir and Konya.

In May 2016, the ruling AK Party elected him prime minister of the Republic of Turkey as well as the party chairman.

After campaigning to shift Turkey to a presidential system of government in an April 2017 referendum, Yildirim bowed out as prime minister before being elected Parliament speaker.