The one-day visit is proving to be an important topic for Ethiopian media for the third day in a row. 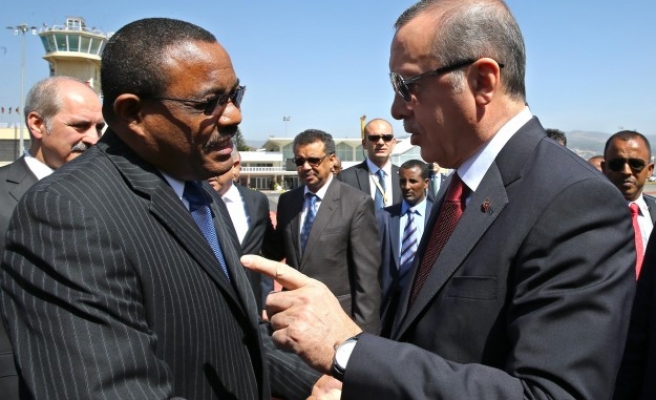 A recent visit to Ethiopia by Turkish President Recep Tayyip Erdogan continues to be fodder for Ethiopian media.

The Turkish President arrived in Ethiopian capital Addis Ababa on Thursday and his visit lasted for a day, but this one-day visit is proving to be an important topic for Ethiopian media on Saturday for the third day in a row.

Soon after Erdogan started his visit to Ethiopia and until now, the Amharic daily Addis Zemen, the English daily Ethiopian Herald and the Ethiopian Broadcasting Corporation, which runs both the state television and radio, a handful of newspapers and webpages, have been analyzing Turkish-Ethiopian relations.

These media outlets have also dwelt on the economic, political, social and diplomatic aspects of these relations as well as on the results of the one-day visit of the Turkish President to Addis Ababa.

During his visit, Erdogan was keen to highlight the fact that his country's relations with Ethiopia were not based on narrow interests.

He said Turkey was keen on offering technological assistance to Ethiopia so that the Horn of Africa state could benefit from its natural resources.

"We think that what we contribute to Ethiopia is very little compared to our love for the country," Erdogan said.

He described Ethiopia as Turkey's "gateway" to the African continent, noting that his country's relations with Ethiopia dated back to the Ottoman era.

Talks between Erdogan and Ethiopian Prime Minister, Hailemariam Desalegn, focused on means of bolstering relations between the two states in all fields.

The Turkish President said he had hoped to elevate Turkish-Ethiopian relations to people-to-people levels.

Erdogan also spoke against terrorism, saying that it had nothing to do with religion, but a form of murder against which all states should stand united.

Referring to the January 7 attack on French satirical magazine Charlie Hebdo in French capital Paris, the Turkish President said: "Turkey strongly condemned the attack and will continue to do so."

"As a country that fought terrorism for 40 years, we are totally against this violence no matter who commits it, where or under what pretense," he added.

He described the acts of terrorism committed by the so-called ISIL, which has overrun vast territories in both Iraq and Syria, as a "murder."

He underlined the need for adopting a unified approach against all terrorist groups.

He condemned the use of the term "Islamic terrorism", explaining that Islam and terrorism could not coherently stand side by side each other.

"There was an act of terror in Somalia today," Erdogan said. "If they say it was committed in the name of Islam, there is no such thing in Islam," he added.

He noted that a true Muslim would not commit suicide, adding that most of the victims of terrorist attacks were Muslims too.

Erdogan should have left Addis Ababa for Djibouti, but had to fly to Saudi Arabia on Friday to offer his country's condolences to the Saudi people after the death of Saudi Arabia's King Abdullah bin Abdulaziz.