Solution process is extremely beneficial for the people of the country and the entire region, says EU foreign policy chief Mogherini. 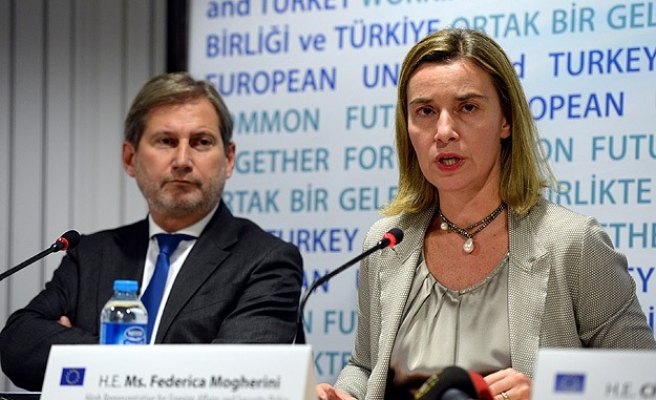 "I am reporting the full support of the EU, more than the support, the encouragement of the EU, to proceed on the peace process efforts that could be extremely beneficial not only for the people of the country but also for the region," said Frederica Mogherini, high representative of the Union for Foreign Affairs and Security Policy.

"I was assured by Demirtas and Akdogan of the good will and intentions of proceeding on these talks," said Mogherini, speaking at a press conference held after meetings with top Turkish officials.

Selahattin Demirtas is the head of the People's Democratic Party, and Yalcın Akdogan is the deputy prime minister responsible for the solution process.

The Turkish government’s solution process was launched last year and aims to secure an end to the decades-long conflict with the outlawed Kurdistan Workers' Party, or PKK, a conflict which has claimed the lives of more than 40,000 people.

The PKK is listed as a terrorist organization by Turkey, the EU and the U.S.

Mogherini is in Ankara along with Commissioner for European Neighborhood Policy and Enlargement Negotiations Johannes Hahn, and the Commissioner for Humanitarian Aid and Crisis Management Christos Stylianides.

Turkish President Recep Tayyip Erdogan met with the top EU officials before the press conference, and the group discussed the situation in Syria, Iraq, Libya and also the Middle East peace process.

Mogherini and Stylianides will head to Turkey's southeast province of Gaziantep on Tuesday, where more than 33,000 Syrian refugees live in four different refugee camps.