EU set to give millions to Turkey in refugee cash boost

Turkey has repeatedly urged the international community in the past to do more to help the Syrian refugees. 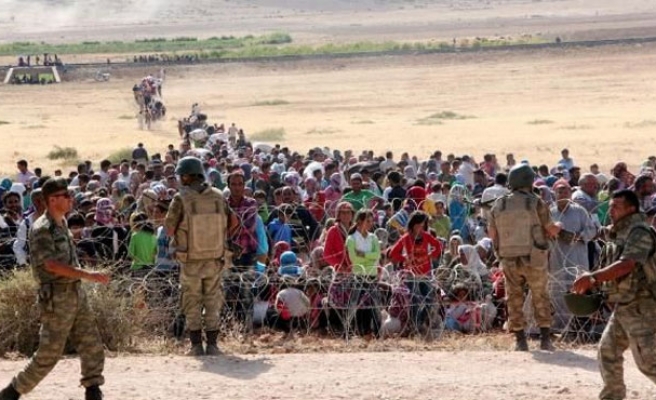 World Bulletin/News Desk
The European Commission is finalizing a financial aid package for Turkey to help cope with its efforts to shelter refugees from Syria and Iraq, a top EU official said Monday.

Mogherini is in Ankara along with Commissioner for European Neighborhood Policy and Enlargement Negotiations, Johannes Hahn, and the Commissioner for Humanitarian Aid and Crisis Management, Christos Stylianides.

She appreciated Turkey’s efforts to shelter the refugees, which according to one estimate hovers at around 1.6 million people.

"The EU intends to be one of the biggest humanitarian donors in the Syrian crisis," she said.

He said the children were the most vulnerable victims of the Syrian crisis. "We have a collective responsibility to provide necessary aid to them," he added.

Turkey has repeatedly urged the international community in the past to do more to help the Syrian refugees.

Turkish Deputy Foreign Minister Naci Koru said recently on Oct. 30: "Turkey is hosting more than 1.5 million Syrians and so far has spent more than $4 billion. Unfortunately, we only received $200 million to $250 million from abroad."

More than 190,000 people have been killed in Syria since the conflict between the regime and opposition forces began in early 2011, according to UN figures published in August.

Hahn said there might still be room to re-launch Turkey's accession negotiations with the EU.

"I am quite positive that there might be the opening of one or another chapter during the next presidency term," he said.

Latvia is expected to take over the EU presidency from January 2015.

He also said negotiations were part of the process and “we have to see further development from Turkey.”

"Turkey's goal is to agree fully on European values and this is the main objective," the commissioner for European enlargement negotiations added.

"We need to take important steps in the EU process. In order to take these steps, we need to come together and we need to talk about our problems and continue our negotiations," Bozkir said.

Turkey applied for EU membership in 1987, with accession talks beginning in 2005.

However, negotiations hit a stalemate in 2007 due to Turkey’s position on the Cyprus issue and opposition to its full EU membership by the German and French governments.

To obtain its membership, Turkey has to successfully conclude negotiations with the EU in 35 policy chapters, which involve reforms and the adoption of European standards.

So far, 14 chapters have been opened, while 17 remain blocked and a further four have yet to be discussed. Only one chapter has been opened in the past three years.

"We see our relations from the win-win stand point," Cavusoglu said.

He acknowledged that the Cyprus issue was discussed during the meeting with EU officials.

"We told the EU officials that the Turkish-Cypriots have put their will on the table and the Greek-Cypriot side should also do the same and restart the negotiation process," he said.

A dispute between Turkey and the Greek-Cypriot administration over the divided island of Cyprus on Dec. 11, 2006, prompted the EU to freeze eight chapters of Turkey's accession process into the 28-nation bloc.

The Greek-Cypriot administration suspended the most recent talks over the island's future on Oct. 7 after Turkey sent the Barbaros Hayrettin, a seismic vessel, to monitor an oil-and-gas exploration mission off the Cyprus coast.

Cavusoglu also said that Turkey insisted on being included in the Transatlantic Trade and Investment Partnership talks between the U.S. and the EU.

Turkish officials argue that any future free-trade agreements signed by the EU with other countries, such as the U.S., would effectively open Turkey’s market to exports from these states because Ankara is a signatory to the Customs Union agreement. But, at the same time, it would also effectively block Turkish exports from benefiting from tax advantages in those same states, should Ankara not be a party to the free-trade deals negotiated by the EU.

The Customs Union is a partnership agreement between the EU and Turkey signed in 1995 that allows the free circulation of goods except for agricultural, coal and steel products.