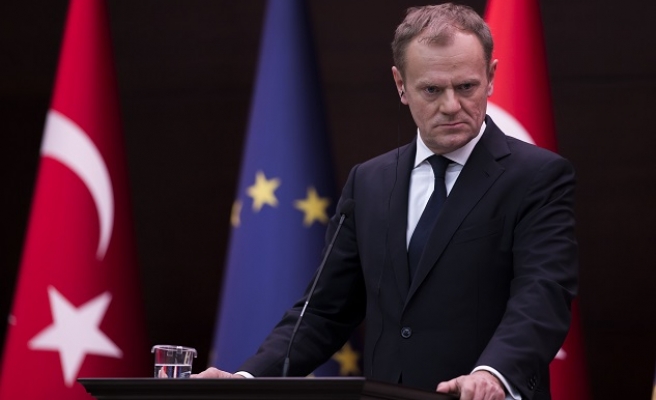 With Tusk wrapping up a whirlwind diplomatic tour before a crucial EU-Turkey summit in Brussels on Monday, the EU unveiled a plan for saving the passport-free Schengen zone that has been jeopardised by the huge influx of refugees.

Tusk has said numbers crossing the Aegean Sea from Turkey to Greece were "far too high" and was to push the Turkish president for more help under a deal signed in November to stem the flow.

The Aegean sea crossing has been the scene of hundreds of deaths, and a Turkish court on Friday jailed two Syrian people smugglers over the death of Aylan Kurdi, the three-year-old boy who drowned and was washed up on a beach in September.

Diplomatic efforts have also failed to relieve the human misery along the Greek-Macedonia border where conditions worsened after a night of driving rain and plummeting temperatures.

The humanitarian crisis is most acute at the Idomeni crossing where around 12,000 people are stranded after Austria and the Balkan states imposed a cap on entries, triggering a rapid build-up in Greece.

"It was very difficult, nobody slept, and this morning the children were crying," said Teshrina Sharif, a Syrian woman travelling alone with a three-year-old and a five-year-old.

Macedonian President Gjorge Ivanov slammed the EU over the crisis, calling for it to do more to help his country and adding "Macedonia is defending Europe from Europe itself."

The sheer scale of the crisis that is dividing EU nations and fostering nationalist sentiment was underscored by Eurostat figures showing the number of asylum applications in 2015 doubled that of 2014.

Separate EU figures showed that an average of 1,943 people were still crossing to Greece every day in February, way above what Brussels wants.

"We need to see the flows from Turkey drastically down soon," EU Migration Commissioner Dimitris Avramopoulos told a news conference as he unveiled the bloc's new "roadmap" for Schengen.

The plan calls for the end of temporary border controls reintroduced by several member states and the restoration by the end of 2016 of full free travel across the 26-country Schengen zone.

Brussels also called for the creation of an EU coastguard force by the summer and to stop countries "waving through" refugees, many of whom want to get to Germany.

If Schengen collapses and border controls return it could cost the EU between five billion and 18 billion euros ($5.5-$20 billion) a year -- equivalent to 0.05 percent to 0.13 percent of the bloc's economic output, Brussels said.

French President Francois Hollande said at talks with German Chancellor Angela Merkel in Paris on Friday that they had the "the same spirit and the same will" in handling the refugee crisis.

Tusk has bluntly warned economic migrants to stay away from Europe, in remarks on Thursday as he arrived in Ankara for talks with Prime Minister Ahmet Davutoglu, who will attend the Monday Brussels summit.

But the EU's deal with Turkey will face fresh scrutiny on rights grounds after an Istanbul court ordered an anti-Erdogan daily into administration.

The crisis now poses an "existential" threat to the EU that challenges its ideals of peace and solidarity that were formed in the ashes of World War II, former European Commission chief Jose Manuel Barroso told AFP.