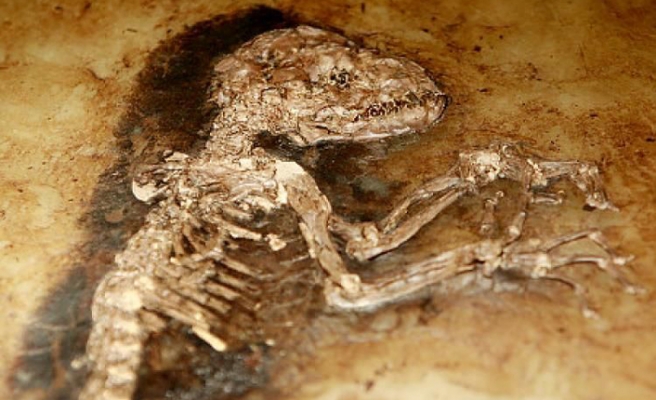 A tooth fossil found 10 years ago in western Turkey has been learned to belong to a predator which is considered to be the ancestor of feliformia, or cat-like carnivorans.

Serdar Mayda, a Turkish lecturer at Department of Biology at Ege University in Izmir province, told Anadolu Agency that the research group found the tooth during surface exploration near the Sabuncubeli area on the Izmir-Manisa highway.

Sedimentary rock samples collected during geology works in the area were examined in the laboratory and the team came across important traces regarding macro mammals, Mayda added.

Stating that Spanish scientists also participated in the research, Mayda said: “We agreed that the material we have is a new species, a new breed, and this information was published last week in the world-renowned Journal Systematic Palaentology."

"We consider that this finding [Lophocyonidae] is the oldest predator in Eurasia and the oldest cat-like specimen found in Anatolia,” he added

He said Feliformia-Lophocyonidae is a suborder consisting of cat-like predators within the order Carnivora.

“We added ‘ictis’, which means ‘small predator’, to the name of Izmir. As species, I named it after my son, ‘Can’. Thus, we have left a paleontological heritage with the name of 'Izmirictis cani',” said Mayda.

He said there is a living species -- especially in Southeast Asia -- called civet, and added that this small-sized living creature was very similar to a predator.

“It is regarded as the ancestor of cat-likes. It has a more primitive appearance than the others. We know it lived some 20 million years ago,” Mayda said.

He added that according to the geological and paleontological data they had, there was a biome that lived in wetland environments.

“The weight of these creatures was about one kilogram (2.2 pounds), maybe a little lighter. We think it was the size of the cats of today.”

Stating that the Izmiricits cani was not a complete carnivorous, he said it also ate plants, roots, leaves and fruit.

He also added that it probably ate mice and squirrels, which were plenty then.

Mayda said the Izmirictis cani would have a great paleontological reflection in the world, and added that the finding would strengthen the position of the Anatolia 22-18 million years ago, which is called early miocene (the period when the third age mammals and monkeys developed).

“Because many living groups are of Anatolian origin. They travel from Anatolia to Europe, Asia and Africa,” he said, adding that Anatolia was a stop for migrating living groups.

“[The fossil is] much older than its samples in Europe. So the host is not Europe, but Anatolia,” he added.